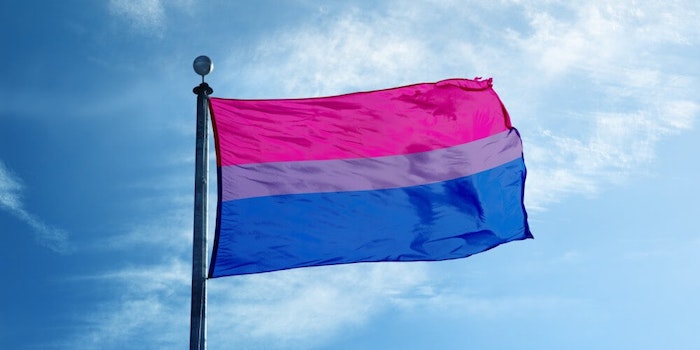 People are celebrating #BiVisibilityDay with art and selfies

'Reminder to my fellow bisexuals to avoid doing crimes today.'

According to bivisibility.com, the honorary day was designated in 1999 and has been celebrated every year on Sept. 23 to combat biphobia and help bisexuals find each other through events on and offline.

This year, people marked the day by tweeting GIFs, comics, and selfies with the hashtag #BiVisibilityDay.

No matter who you're dating (or not) or how you feel comfortable expressing yourself, your bisexuality is still valid, and I will fight anyone who says so otherwise

Love,
Your bi nb mom friend who's in a long term relationship with a cishet guy pic.twitter.com/mD64zmm9DG

Cheekily referring to the erasure of bisexual people, some people used the hashtag to joke that #BiVisibilityDay is the only day bi people can be seen (and they should, therefore, hold off on committing crimes until a later date).

It’s #BiVisibilityDay so remember to pay for your shopping, don’t try to walk past the queue, and probably leave your jewel heist plans for tomorrow! pic.twitter.com/gdrEbkfxIv

Hey it’s #BiVisibilityDay the one day a year you can see bisexuals and biromantics. IF YOU ARE PLANNING ON LOOKING AT BI PEOPLE TODAY PLEASE REMEMBER YOUR SPECIAL GLASSES AS STARING DIRECTLY AT US IS NOT RECOMMENDED BY THE SURGEON GENERAL pic.twitter.com/1tnqiRhNil

Happy #BiVisibilityDay to those who have arrived there and to those who are still figuring it out. pic.twitter.com/k5vqADpkGq

Unless the crime we wanna do is like, public indecency, which is dastardly hard to pull off while invisible, even WITH the hypervisibility of any "indecency" attributed to us

Today's the day to moon the law

What a coincidence that they were all born on the same day!

We are v powerful

Happy #BiVisibilityDay. A reminder that:

1. Bisexuality is inclusive of all genders
2. You don’t need to be equally attracted to men and women to label yourself as bi
3. Your bisexuality isn’t any less valid because you’re in a monogamous relationship
4. Being be is the BEST!

Oh, and now it's #BiVisibilityDay? Fucking hell, we already get twice the potential sexual partners, what more do we need??? https://t.co/Tyu2KcHfUq

(not that it's a competition but the bi flag is the prettiest queer flag imho.) #BiVisibilityDay

I'm happily bisexual, and very much valid. If you cannot accept that, then it's your loss.

People are taking the opportunity to share selfies and spread positivity, and some even used the hashtag to come out as bisexual.

It’s #BiVisibilityDay so you gotta look at me today it’s the rules pic.twitter.com/l910f4CphN

Tfw you’re a disaster bi and you badly paint your nails for #BiVisibilityDay tomorrow pic.twitter.com/o7zvmTabVY

Happy #BiVisibilityDay everyone, let's be as visible as possible! pic.twitter.com/IlDXrj7ei8

Many raised awareness of the problems bisexuals face within the LGBTQ community and beyond.

Wondering why we need #BiVisibilityDay?

We will meet at 7:30pm. Please bring a candle with you.

‘I don’t like girls who like boys. I can’t be with you if you’re bisexual’ – something my ex girlfriend actually said to me months into our relationship.

I’m bisexual and I won’t let anyone take that from me again or make me feel ashamed for it. #BiVisibilityDay pic.twitter.com/CcKKt2jfuR