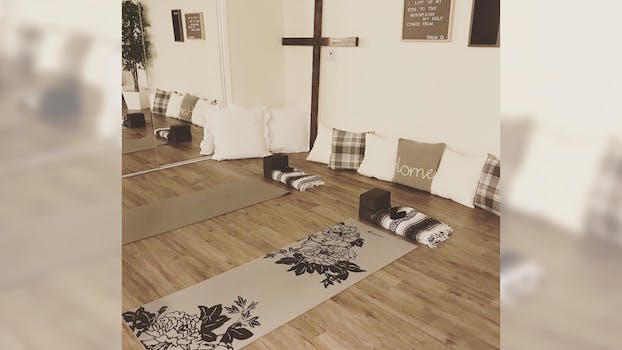 A website is getting backlash for promoting a “Christian yoga certification” and claiming yoga appeared in the Bible before other religions adopted the practice and needs to be “redeemed.”

“Yoga is a booming industry!” reads the ad description. “Learn how to incorporate your faith with fitness and get paid to teach. Get started today for $250.”

“That moment when you copy your friends homework really hard,” Motla wrote in a Facebook post. “I wish they at least tried to call it Christian stretching.”

That moment when you copy your friends homework really hard. I wish they at least tried to call it Christian stretching.Photo courtesy: Vidhya Iyer

Screenshots showed the conversation in the comments of Yoga Faiths’ ad. One Facebook user identified themselves as Christian and commented, “I am wondering what exactly makes this a Christian discipline, since it’s origin is pagan?”

To this, the organization responded that yoga was a Christian practice first.

“We believe postures of prayer were first in the Bible before other people/religions/organizations used them for however they use them,” Yoga Faith wrote. “Our mission is to redeem what is first found in the Bible; meditation- chanting- worship with all our might, breath and strength … We think they are based in the Bible, but many organizations like Hindus use God-created concepts…for other purposed [sic] other than glorifying the Creator.”

The founder of Yoga Faith, a white woman named Michelle Thielen, has a Facebook page showing photographs of herself in various yoga postures. At least one of her posts reference “om,” a spiritual mantra from philosophical texts in Hinduism.

People on social media criticized Yoga Faith’s premise. “Please make it stop. Just don’t do anything like these people,” one user wrote. “Yoga is not for sale.”

Today I regrettably learned that YOGA FAITH exists, a Christian Yoga org ????? that exists to promote Jesus and the Bible?!?! pic.twitter.com/dxYiTOR3k9

In a statement to the Daily Dot, Yoga Faith said, “We do not seek to colonize yoga and we sincerely apologize if any of our posts came across in an offensive way, that is truly not our intention.”

Still, commenters expressed that in its ad and baseless claim that yoga was a Christian practice before appearing in other religions, the organization pushed past the line of respectful practice and into appropriation. It’s hardly the first organization to do so, and organizations like Holy Yoga also use a Christian faith-based approach to yoga. Yoga Faith itself is part of the Christian Yoga Association, which boasts more than 100 teacher members on its website.

Academics have noted that yoga has “reinvented” many times since its ancient origins, but it’s not disputed that the practice can be traced back thousands of years to communities in South Asia to East Africa. Platforms run predominantly by white people and catering specifically to white Christians often neglect this history.

“In the U.S., for example, the image of yoga is often associated with white, thin, able-bodied, middle class women,” Maisha Johnson wrote for Everyday Feminism in 2016. “The problem lies not with you doing the practice, but with how yoga is commonly practiced and commercialized in Western contexts like the U.S.”