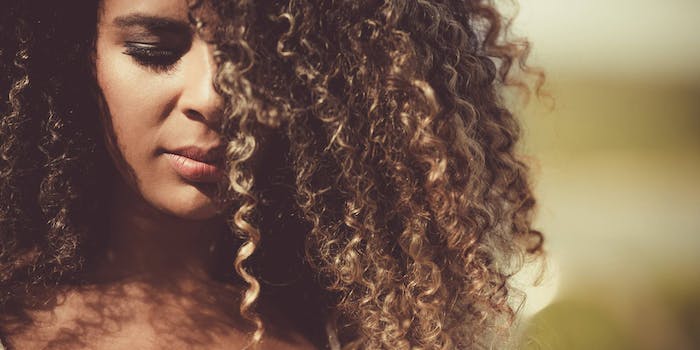 A new study finds that 1 in 5 black women feel pressure to straighten their hair for work.

The natural hair struggle has gone mainstream recently, with brands like SheaMoisture bringing up the segregation of the “ethnic aisle,” and high school girls in South Africa protesting over a dress code that forbade them from certain hairstyles. The issue is that black women are often told their natural hair is unprofessional or ugly. And now there’s a study to confirm those viewpoints are prevalent.

The Perception Institute did a study on implicit bias against hair textures and found that “white women show explicit bias toward black women’s textured hair. They rate it as less beautiful, less sexy/attractive, and less professional than smooth hair.” The institute also confirmed that black women face social stigma for having textured hair, and that while most women are concerned with their hair, black women face far more anxiety than white women.

“One in five black women feel social pressure to straighten their hair for work—twice as many as white women,” said the findings. However, it also showed that many black women have internalized that stigma. “The majority of participants, regardless of race, show implicit bias against black women’s textured hair.”

“Many black women will feel affirmed by the Good Hair Study–it is what they have always known and experienced: wearing natural hairstyles has deep political and social implications,” said Alexis McGill Johnson, co-founder and executive director of Perception Institute, in a press release. “Our hope is that those who create the images we see in our daily lives will consider how bias against natural hair can undermine the ability for black women to be their full selves and affect their professional trajectory, social life, and self-esteem.”

This bias can be seen everywhere, from the Google results for “unprofessional hair” including only photos of black women, to actress Zendaya being criticized for wearing dreadlocks on the red carpet, to the Getty Images search for a photo for this article bringing up only white women for “natural hair.”

But the bias stems not from the hairstyle, but from racism against black women. In 2015, Allure magazine gave white women tips on how to sport an “afro,” suggesting that what’s “unprofessional” on black women is fashionable on white women.

In case you want to test your own bias against natural hair, the Perception Institute has an Implicit Association Test you can take.