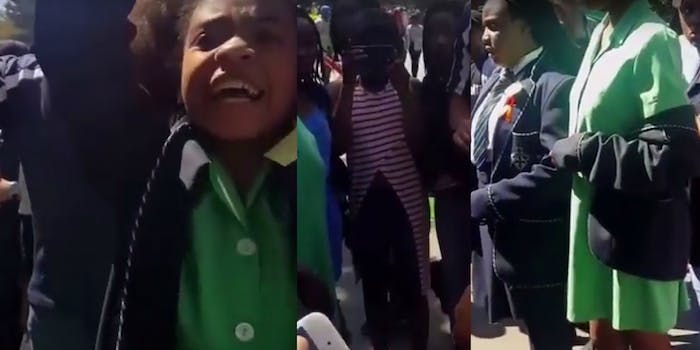 People are calling to #StopRacismAtPretoriaGirlsHighSchool.

Protests over allegedly racist dress codes at a school in South Africa have spilled over online, with people tweeting about how, once again, black women’s hair has become a political issue.

The protests began when a group of students at Pretoria Girls High School were told their hair violated the school’s code of conduct. According to News24, one girl told Panyaza Lesufi, Gauteng province’s Member of Executive Council for education, “I have a natural afro, but a teacher told me I need to comb my hair because it looks like a birds nest.”

Students soon began protesting the school, for which they faced harassment and threats of expulsion.

I read this with such a heavy heart #StopRacismAtPretoriaGirlsHigh pic.twitter.com/hz9dmYjniO

Why should we always defend being who we are? This needs to end! #StopRacismAtPretoriaGirlsHigh pic.twitter.com/DlmsFUXBUu

"Stop speaking that funny language." In Africa being told not to speak your own language. #stopRacismAtPretoriaGirlsHigh

According to the code of conduct, “Cornrows, natural dreadlocks and singles/braids (with or without extensions) are allowed, provided they are a maximum of 10mm in diameter.” It also says if hair is long enough to be tied back, it must be in a ponytail, and that all styles should be “conservative.” Students have spoken of having their braids measured at school, and of teachers interpreting the code to mean “no Afros” or similar natural hairstyles.

One former student said teachers treated afros as if they were inherently unruly. “It’s one thing if your hair is really in your face and everything,” said Tiisetso Phetla. “But if your Afro is neatly tied, why must you be apologetic for being a black African child in South Africa?”

This is far from the first time black hair, especially black girls’ hair, has been the subject of argument. The U.S. military briefly instituted strict hair guidelines for women, which left very few options for black women. In the general workforce, white women’s hair, no matter the style, is often seen as “professional”—even when white women wear their hair in styles that black women are punished for.

The protests have started an international conversation around the politics of black hair, with women around the world standing in solidarity with the students, using the hashtag #StopRacismAtPretoriaGirlsHigh.

What's sad is that #PretoriaGirlsHigh is just the tip of the iceberg. We haven't scratched the surface of racism in SA's 'elite' schools.

A petition about the issue has over 17,000 signatures as of publishing. Addressed to MEC of Education Lesufi and Headmistress, Mrs K du Toit, it says: “It is unacceptable that in a country in which black people are a demographic majority, we still today continue to be expected to pander to whiteness and to have it enforced through school policy. Black children should be allowed to just be children, without being burdened with having to assert their humanity.”

Lesufi has been commenting on the situation on Twitter and is visiting the school today.

Thank you so much for bringing this to our attention as well, truly appreciate https://t.co/C8mTWiGnqH

Leave that with me and my team. It will be done. We won't disappoint https://t.co/6K61iz0fOq

Let's call it a day! I have an early morning engagement. Thanks for the support #stopRacismAtPretoriaGirlsHigh

The school appears not to have commented on the situation as of this posting.