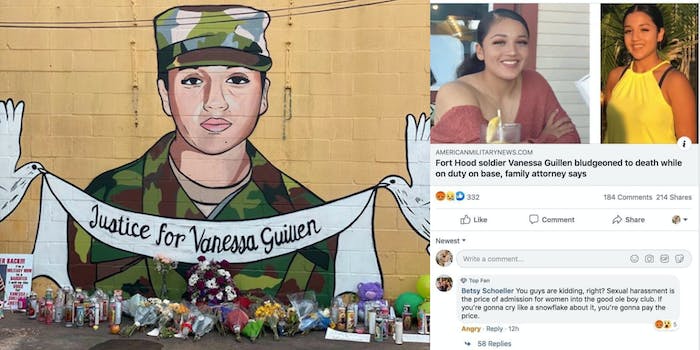 Betsy Schoeller wrote on Facebook that sexual harassment is the way into the 'good ole boy club' and that anyone who cries about it will 'pay the price.'

“You guys are kidding, right? Sexual harassment is the price of admission for women into the good ole boy club. If you’re gonna cry like a snowflake about it, you’re gonna pay the price,” Betsy Schoeller of the Wisconsin Air Guard wrote in a comment.

Schoeller’s comment, which has since been deleted, was posted under a story, titled “Fort Hood soldier Vanessa Guillen bludgeoned to death while on duty on base, family attorney says.”

Guillen’s partial remains were found on Tuesday. It was determined that U.S. Army Specialist Aaron Robinson is suspected of bludgeoning the 20-year-old to death with a hammer while she was on-duty in an armory room at the Fort Hood military in Texas. Robinson died by suicide on Tuesday, according to NPR, when law enforcement officials were closing in on him. Guillen had told her family she was being sexually harassed by a superior shortly before she was killed.

“My sister was too afraid to report the harassment because no one would listen to her,” Vanessa Guillen’s sister, Lupe Guillen, told NPR. “They take sexual harassment, sexual assault, as a joke. They don’t care.”

Fort Hood investigators said via Facebook they “have no credible information or report that Guillen was sexually assaulted” but are still investigating.

Schoeller is also a senior lecturer at the University of Wisconsin-Milwaukee. A petition is now calling for her termination. The petition, which has been signed by over 100,000 people, was created by a student at the university, Emily Cruz.

“As a woman, and a student at UWM I feel unsafe knowing that we have professors who think the sexual assault of women serving in the military is justified. UW-Milwaukee claims to care about the safety of their students, therefore we demand and are holding UWM accountable to take action against Professor Betsy Schoeller,” Cruz wrote.

Update 2:17pm CT, July 5: When reached for comment, a University of Wisconsin-Milwaukee spokesperson pointed the Daily Dot to its public statement on the matter. The university claims Schoeller’s comments “are repugnant and terribly at odds with UWM’s values,” however, it cannot legally fire her because “this type of speech is protected by the First Amendment.”

It also sent the Daily Dot a public statement by Schoeller on her behalf. In that statement, Schoeller apologizes that her words were “misinterpreted” and says she is “shocked and saddened (her) original post was interpreted out of context.”

In the statement, she leaves out part of her original text: “Sexual harassment is the price of admission for women into the good ole boy club. If you’re gonna cry like a snowflake” (or any other demeaning term), ‘you’re gonna pay the price,’” she quotes herself as writing. In her original comment, she wrote at the beginning, “You guys are kidding, right?” She does not address this comment in her statement.

The Daily Dot has reached out to the Wisconsin National Guard.