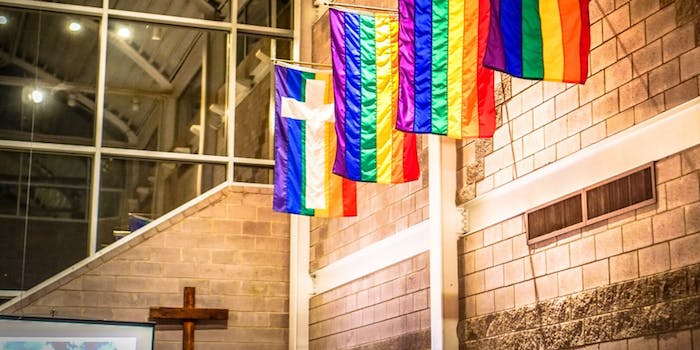 A California megachurch has been openly promoting conversion therapy and other homophobic content on its social media with the hashtag #OnceGay, Out magazine reports.

Bethel Church in Redding, California, asks on its website and Instagram page, “Can a person leave homosexuality behind?” The church also links to the website for Changed Movement, which is described as a “community” for people who “once identified as LGBTQ+.”

Conversion therapy—programs that teach gay people can be turned straight—have been discredited by most major psychiatric and medical associations. The practice also leads to increased anxiety, depression, and/or suicide ideation while straining relationships between LGBTQ people and their families, according to the Southern Poverty Law Center. Rolling Stone reported that in the last year, close to 50% of people who were exposed to conversion therapy have attempted suicide, and it’s one of the most harmful struggles for the LGBTQ community.

Content with #OnceGay on the Instagram account for Bethel Church also includes personal testimonies from people who say connecting with the church led to becoming straight.

Post 1 of 5: "Throughout most of my life I always felt excluded, and I questioned my sexuality and my gender. I didn’t feel like a girl, but I also didn’t identify as a boy. I 'came out' when I was in my early twenties after a brief marriage to a man fell apart. I felt lesbianism explained my childhood and young adult experiences. I thought I was finally being authentic and true to myself. I felt powerful and asserted myself in stereotypically masculine ways. I attended seminary as an openly gay student. ⠀ _⠀ "After seminary, I began working with youth, but questioned my faith. In that season, I reevaluated what I believed about God, what I believed about the Bible and what I believed about myself. I resolved to follow my faith sacrificially, which required re-evaluating what I understood the Christian sexual ethic to be. Up to that point, I believed I was born gay and that God had created me that way. As I further studied Christian doctrine, I no longer believed I was born a lesbian. My experience of God’s love, the Christian community around me, and my desire to pursue a life of prayer had a dramatic influence on my life.⠀ _⠀ "I pursued pastoral care and counseling that addressed my childhood hurts and perceptions. I acknowledged that I had rejected myself as a woman. I did not specifically seek change in my sexuality; nevertheless, I began experiencing changes in my desires. I became attracted to a man (which was one of the most unexpected and humiliating experiences of my life since I had so fully identified as a lesbian). He and I got married and have had a strong marriage of 13 years thus far. Today I am happy, joyful, and feminine – all things I never was while living as a lesbian. I am no longer sexually attracted to women. Rather, I am a strong advocate for their empowerment." – Elizabeth Woning #oncegay #iamHis @changedmvmt

Post 2 of 5: Jesus gives His love freely to all, regardless of where we are in our individual journeys. When Jesus enters into our lives, He engages with our deepest feelings and beliefs. He knows us better than we know ourselves and wants to lead us into His vision for humanity. Sometimes, that is countercultural. The love of Christ declares, “I want you! I am for you! And only I satisfy!” His love gently leads us to surrendering all—even what we believe about ourselves—in order to be fully satisfied and full of life.⠀ _⠀ CHANGED is a community of friends who once identified as LGBTQ+ and through encounters with the love of Jesus, have experienced His freedom in their lives. @changedmvmt wants to invite you to look deeper, to go beyond the cultural labels and expectations, and to find lasting fulfillment. To learn more or receive help on your journey, visit www.changedmovement.com #oncegay (Link in profile)

The church has received heat on social media, especially in the last few days. Many flipped the narrative of the church’s hashtag to share stories of how they were #OnceGay and still are. Many also said their faith and sexual orientation aren’t mutually exclusive.

“STILL gay, and the happiest and closest to Christ I’ve ever been, now that I’ve shed toxic self-destructive theologies like the one you promote,” Twitter user @canklemorris wrote. “These are the faces of the body of Christ.”

What’s up @BethelRedding? Lemme tell you my #OnceGay story. I’m STILL gay, and the happiest and closest to Christ I’ve ever been, now that I’ve shed toxic self-destructive theologies like the one you promote. These are the faces of the body of Christ. pic.twitter.com/iL19RPAx6Z

#oncegay, 19 years of the worst purity culture had to offer and: I'm STILL gay! I spent my whole life learning that by falling in love, I was a disappointment to my family, my community, and my god. getting out and finding LGBT community is the only reason I'm alive and ok today pic.twitter.com/fo63HWvujM

I internalized queerphobia from such a young age, I literally didn't admit even to myself that I was bisexual until this year. My husband and God still love me & I'm paving the way for my children to be (and be loved for) exactly who they are. #oncegay #thisiswhatoncegaylookslike pic.twitter.com/GzxOs6pAAg

#OnceGay. Still gay, just married to my incredible wife, ordained to serve an amazing church, and having the time of my life. #joyfullyqueer pic.twitter.com/yTsmYp6lLe

On Thursday, the church said in a Facebook post that it doesn’t aim to give the message that “all must change.” The post drew criticism from some followers of the church who thought the church was being “weak” in permitting “sin” for its followers.

Post 5 of 5: God loves all people, LGBTQ+ and straight. The message of CHANGED has never been “All Must Change.” We…