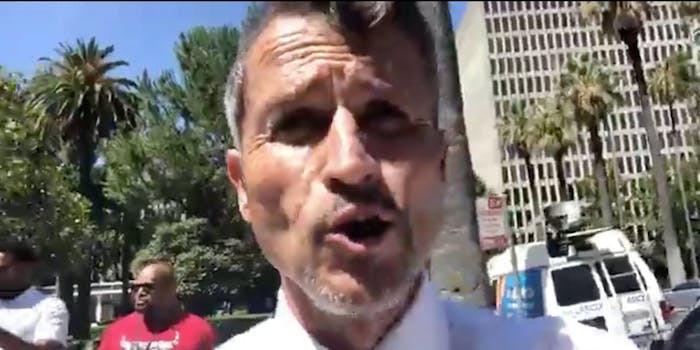 The Facebook video, which mostly shows Austin Bennett rambling about vaccinations and how the statues in front of the California Capitol building are a “representation of the fallen angels,” was posted on his profile on Wednesday. It’s since been shared hundreds of times.

“I’m in front of the Capitol of California,” he says in the 17-minute long video before continuing to spew conspiracy theories about vaccination.

In the middle of his rant, he sees Pan walking down and addresses him.

“Oh my goodness you guys, what are the chances of this,” he says, changing the angle of the camera from his face to show Pan. “Right here, right here, here’s the…what’re the chances of this Sen. Pan, you’ve got to tell us please, I beseech you why do you think water is the most dangerous ingredient in vaccines… I’m a constituent… I wanna know.”

Pan tries to humor him for a while.

“If you had a choice to drink aluminum or water what would you choose?” Bennett continues, walking alongside Pan. From the angle, it appears that Bennett is quite close to Pan’s face.

And then Bennett pushes Pan, to which Pan turns around and says, “Hey! OK…”

“Adios,” Bennett says before turning the camera to himself. “I probably [shouldn’t have] done that. I’m not gonna take off. I’ll wait here. I’m not gonna go.”

He then walks back to Pan, saying he pushed him because Pan laughed. “But I don’t think it’s funny,” Bennett says. “These vaccines are killing children.”

Pan is seen with his companions are seen on the phone, seemingly calling the police.

Bennett is still prowling at the scene as police sirens are heard growing louder. “So yeah, I pushed him. He’s a liar,” he says. “Truth of the matter is, he got what he deserved, he would be hanging for treason, for assaulting children.”

He continues the video for another seven minutes before starting to take off. He says the assault was retaliation for “poisoning children” with vaccinations.

Bennett was later cited and charged with a misdemeanor for assault and subsequently released on the scene, according to BuzzFeed News. Citations are generally issued to people deemed to be of “lower risk” to society.

After a 2015 measles outbreak, Pan, also a pediatrician, led an initiative stopped allowing parents to opt out of vaccinating their children for religious or personal reasons, BuzzFeed reports. Pan has been threatened and harassed in the past for his work ensuring vaccination for children’s safety.

Update 4:42pm CT, Aug. 20: A Facebook spokesperson told the Daily Dot that the video did not violate any of its community standards.

“We want everyone using Facebook to feel safe–that’s why we have Community Standards and remove anything that violates them, including violent content. In this instance, after a thorough investigation, we determined there was no basis to remove the video as it does not violate our policies,” the spokesperson said.