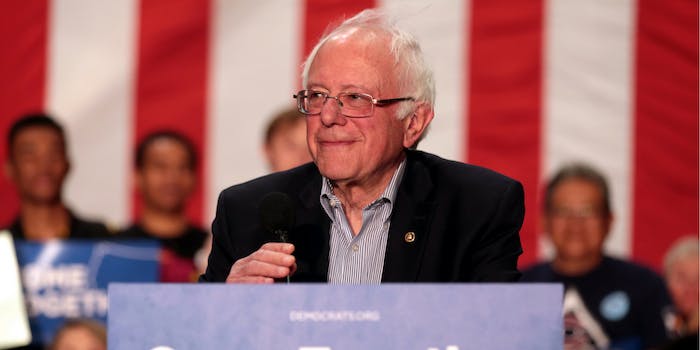 A man is opening a Women's March event—what could go wrong?

On Thursday, the organizers of the Women’s March announced their opening speaker for the Women’s Convention, the first national convention in 40 years, held Oct. 27-29 in Detroit. Will it be the persistent Sen. Elizabeth Warren? Or perhaps Sen. Kamala Harris, preaching to the choir about being interrupted by a male colleague mid-sentence?

Nope. The opening speaker for the Women’s Convention with be Sen. Bernie Sanders.

We are so excited to have @SenSanders join us at the #WomensConvention October 27-29th in Detroit! https://t.co/UssiTSe2IN

To be clear, the three-day convention is packed with more than 60 female speakers, including Rep. Maxine Waters, who is headlining the weekend and whose “reclaiming my time” statement inspired the convention’s theme; Indivisible co-founder Leah Greenberg; and trans activist Lilianna Reyes. However, the announcement left women questioning why a male ally to the women’s movement was given center stage instead of moving to the side for a woman to speak.

Seeing this white man (even if his campaign didn't hurt Hillary's vote count) as the face of the convention really feels like a gut punch.

Looks like the Onion anticipated Bernie's role at the #WomensConvention back in 2012.

This choice sends the wrong message. We've reached out to the @womensmarch organizers to share our disappointment and offer our help. https://t.co/DjXEqr3mac

I’m just stunned, frankly, that the Board allowed this decision to be made. First #WomensConvention in decades & a man opens it. Come on. pic.twitter.com/LXyStjxpvo

Some found the Women’s March organizers’ decision to be an outright insult to women who experienced harassment by male Sanders supporters, aka “Bernie bros,” during the 2016 presidential race—not to mention to Democratic presidential nominee Hillary Clinton, too.

Why not just have the #WomensConvention open with a choir of Bernie Bros harmonizing the word "actually"?

Is the theme to the first day of the #WomensConvention "shut up woman?"
Just wondering.pic.twitter.com/8O8uzJpUKS https://t.co/oOrVG4KZK2

Dear @womensmarch, here is why people are so frustrated with #BernieSanders speaking at the #WomensConvention. https://t.co/L2kSEQMALN

And this is what women get when they question Women's March selecting sanders as opening night speaker. pic.twitter.com/aqnts79peJ

Sanders’ railing against establishment politicians like Clinton, and institutions such as the Human Rights Campaign and Planned Parenthood, resonated with millennials on the campaign trail in early 2016.

“I think that right now, no one can deny that Bernie Sanders is probably one of the most powerful U.S. senators…on progressive issues, women’s issues, mobilizing Millennials,” Women’s March co-founder Mallory told the Detroit Free Press. “He is really in line with the principles of the Women’s March.”

However, many critics of his speaking role resented the unconventional politician’s presence at an event purposed to unite and uplift the voices of women.

When the #WomensConvention opens with a man who was willing to stump for anti-choice candidates and do away with a litmus test on abortion. pic.twitter.com/uxFpuh8u6J

This man who dismissed challenges/perspective of women as “identity politics”. This man who mocked Planned Parenthood as “establishment”

Sanders has been pushing the Dems—which he's not actually a member of—to support dude-bros who don't believe in pro-choice. Fuck this.

A Change.org petition has already been created pushing for organizers to give the opening speaker slot to a woman. In response to pushback the Women’s March anticipated for putting Sanders in a prominent speaking slot, co-founder Tamika Mallory said, well, Waters will be there, and we’ve invited other women to attend, but Sanders has already gotten back to us.

“We believe as women…that we ought to have more than just women at the Women’s Convention,” Mallory said. “People want to hear from the leadership from within our government who can give us some insight about what’s happening…so we can know what we need to do to be able organize.”

Following the onslaught of criticism, the Women’s March issued a statement that Clinton, and Sens. Harris, Warren, and Kirsten Gillibrand were unable to speak at the convention because of scheduling conflicts.

The #WomensConvention will open Friday morning with remarks from a number of inspiring women leaders. Please read and share our statement. pic.twitter.com/OlFX5Zi8Q2

“We are excited to come together, to unite across our differences and to fight for the future we all believe in,” the statement concluded.