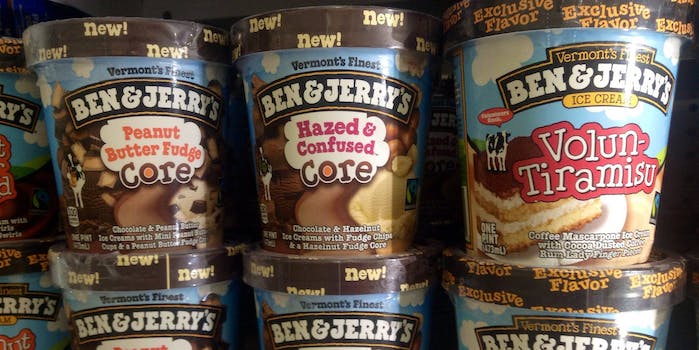 Get your scoop of Peanut Butter Fudge with a lesson about systemic racism.

Ben & Jerry’s is no stranger to politics. Earlier this year, the company released an ice cream flavor meant to symbolize Bernie Sanders’s goal of redistributing wealth from the 1 percent.

But have you taken a look at its blog recently? Damn, B&J is woke af.

In the post “7 ways we know systemic racism is real,” the company walks readers through issues of employment disparities, access to education and health care, and practices like redlining that historically made owning a home and accumulating wealth over generations far more difficult for black people.

There are also posts about transparency in government spending, the bleaching of the Great Barrier Reef, and how Voter ID laws are keeping minorities, the poor, and the elderly from the polls. Oh, and here’s how to make an ice cream topping bar with your slow cooker, just like Gloria Steinem always dreamed.

Ben & Jerry’s has also been getting punny with their flavor names, like “Empower Mint,” which “reflects our belief that voting gives everyone a taste of empowerment, & that an election should be more ‘by the people’ and less ‘buy the people!’”

In that spirit, hey, Ben & Jerry’s, we have some ideas for you!

Get ’em while we’re still fired up!

Update 10:21am CT, Oct. 7: Ben & Jerry’s has featured a post called “Why Black Lives Matter” on their homepage, and urges their customers not to be complicit in violence and threats against black people. “All lives do matter. But all lives will not matter until Black lives matter,” they write. Still woke.