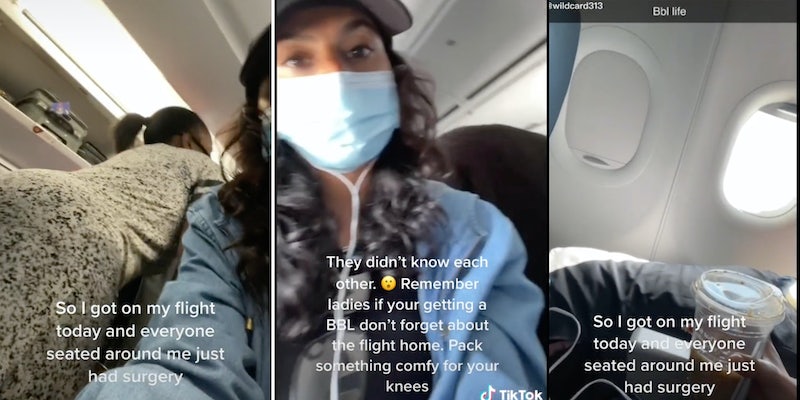 'I beg yall to please spend the extra $$ for recovery House!'

The video, posted by Andrea Gallegos (@wildcard313), shows her sitting next to a woman who is facing backwards with her butt sticking out. The woman doesn’t appear to know that the TikToker is recording.

“So I got on my flight today and everyone seated around me just had surgery,” text overlay on the screen reads.

Gallegos then pans her phone’s camera over to another woman near her—who also seemingly got a BBL.

“They didn’t know each other,” reads more screen text. “Remember ladies if you’re getting a BBL don’t forget about the flight home. Pack something comfy for your knees.”

It’s not immediately clear from Gallegos’s video where the flight is headed to, but she stated in a comment that it was flying out of Miami. According to some online reports, physicians recommend postponing travel for as many days as possible after getting surgery to minimize the risk of complications. One website said that patients shouldn’t travel by plane for at least 10 days since it exerts pressure on the buttocks and hips.

Commenters, meanwhile, were shocked by the clip. While some chastised Gallegos for recording strangers without their consent, many believed that the TikTok was embarrassing.

The video has more than 11 million views on TikTok and thousands of comments.

The top comment on the post, with at least 148,000 likes, reads: “This is what happens when you don’t spend the extra money on the recovery house after the BBL.”

“This is SO SO sad to me…,” read another comment.

“We are a lost nation,” a third viewer said.

Still, others were less judgmental of the surgery and more concerned about the safety of the patients, urging folks to spend the extra money for a proper recovery.

“As a Flight Attendant, I beg yall to please spend the extra $$ for recovery House! This is a safety issue! What if we have to evacuate..” one person wrote.

“What happens when there’s turbulence and you HAVE to have your seat belt on????” another questioned.

The Daily Dot has reached out to Gallegos via TikTok comment.