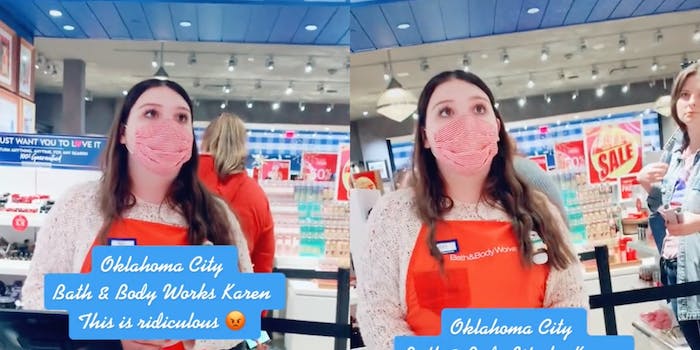 ‘Are you pulling the race card?’: Viral TikTok shows Bath & Body Works ‘Karen’ being called out by customer

'She continues to get an attitude with me... and all I was doing was saying hello.'

Viral TikTok footage shows a Bath & Body Works employee, dubbed a “Karen” by the poster, getting called out at an Oklahoma City mall for allegedly being rude to a customer.

The customer, known as Quinette Lashay (@thequinettelashay) on TikTok, posted footage of an argument between herself, the employee, and eventually the store’s manager. Her video garnered nearly 200,000 views as of Tuesday.

According to Lashay, the employee ignored her greeting and only asked her “cash or card.”

Lashay says she started to pull out her card, but the employee continued to “get an attitude.” Eventually, she explained to the store manager that the worker refused to serve her. But the employee denied the claims and accused Lashay of being disrespectful to her instead.

The two continued to argue back and forth, and the employee said that at Bath & Body Works, cashiers are supposed to ask what form of payment the customer plans on using before greeting them. Lashay told the employee that since she was still arguing, she was only proving how rude she was.

“There’s a lot of maturity that needs to happen here,” Lashay told her.

The argument continues until the Bath & Body Works employee can be heard saying, “Are you pulling the race card?” After the customer and her companion collectively gasped, the employee said, “Oh no, I’m asking because my boyfriend is Black.”

At that point, another employee pulls the arguing worker away from the situation.

Viewers were shocked at the employee’s behavior and comments. Some said she simply wasn’t built for customer service. Others called out her attitude and excuse for refusing to greet the TikToker.

Another viewer said, “The gasp from the entire store! Means the bystanders knew she was wrong as two left feet!”

A different user wrote, “This is why I pay attention at the register. If u said hello to the previous customer you can say it to me.”

Many viewers agreed that the employee didn’t seem to think she had done anything wrong, and some said she looked caught off guard at getting put in her place.

One user said, “She definitely wasn’t ready for you putting her in her place.”

Still, some felt that customers aren’t entitled to polite service or a greeting.

“The customer isn’t always right,” one commenter wrote. “If u disrespect me my respect goes down for u also.”

However, Lashay pointed out that the problem was beyond the lack of greeting.