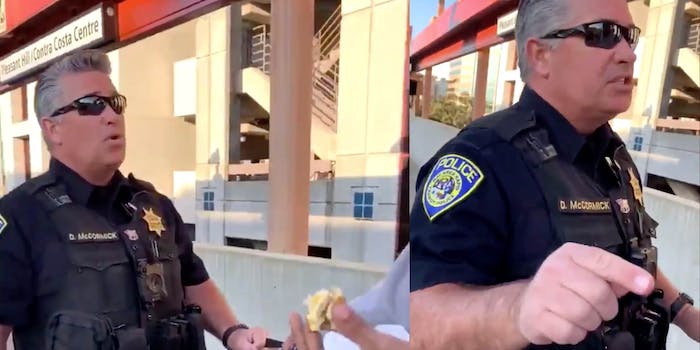 Protesters held an 'eat-in' on the platform.

Viral videos show a white cop detaining and handcuffing a Black man who was eating a sandwich on a San Francisco BART platform.

The videos were shared to Facebook on Friday under the name Bill Gluckman, which appears to be an alias for Steve Foster, the man seen being detained in the clips.

“Just out of curiosity.. has anybody ever got arrested and written a ticket for eating a breakfast sandwich on a Bart platform at 8:00 in the morning. Nobody? Just me? Okay,” the Facebook post said.

Under state law, passengers are prohibited from eating or drinking in paid areas of the station, according to ABC News.

An officer, whose nametag identifies him as D. McCormick, is seen scolding Foster for eating a sandwich and tugging on his backpack throughout the confrontation.

In the first video, which is about 15 minutes long, Foster is seen asking why McCormick stopped him for eating a sandwich.

“You single me out out of all these people,” Foster says.

“You’re eating,” McCormick replies. “It’s against the law… it’s a violation of California law I have the right to detain you.”

The argument continues as McCormick tucks at Foster’s backpack.

“Can you please let my backpack go?” Foster asks.

“Are you going to cooperate?” McCormick responds, and Foster says yes.

“I’m going to jail for eating a fucking sandwich?”

“No, for resisting arrest.”

“There are no signs here that say we can’t eat on the platform,” a woman says from behind the camera.

They argue for a bit before McCormick announces Foster is going to jail “for eating, it’s illegal!” In a second video, Foster is seen being led out of the station in handcuffs as he argues with two officers who keep demanding his information.

On social media, people were outraged at the videos. Many said other people eating or doing other illegal activities on the platform are never punished.

“There are people vaping their wax pen on the platform and in the train and I have to smell that crap,” one user wrote on Facebook. “I have seen people urinate on the platform with their pants on then get on the train right after.”

On Saturday, within a day of the incident being posted on Facebook, some protesters held an “eat-in” lunch on the BART platform to protest the police’s actions, according to ABC News.

Janice Li, a board of directors member of BART, condemned the attack in a Facebook post on Friday.

“I do not support enforcement of the no eating/drinking rule,” she wrote. “That kind of enforcement is not a good use of BART’s limited resources, it potentially leads to use of force cases, and it does nothing to deal with real personal safety issues at BART or the real issues tanking our ridership like crowded trains or unreliable weekend service.”

On Saturday, she attended the sit-in and said the problem is part of a bigger picture.

“I realize some things are illegal with our penal code, but I want to be mindful of how we’re using resources to enforce our system,” she told ABC News.

According to ABC News, BART said Foster was not arrested and that police gave him a citation and put him in handcuffs because he refused to provide his name.