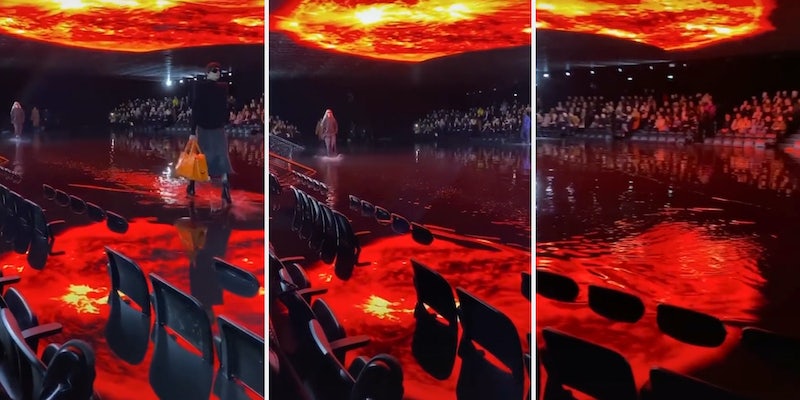 ‘We live in the darkest timeline’: Fashion show slammed for seeming to ‘glamorize’ climate change after video resurfaces

'Tired of climate change just being an aesthetic.'

A video of a fashion show from 2020 has resurfaced on TikTok, and the brand behind it is being accused of glamorizing climate change.

According to multiple reports at the time, the show comes from Balenciaga, and part of its intent was to highlight the threat of climate change. Balenciaga’s Fall/Winter 2020 show from Paris Fashion Week was lauded by High Snobiety as part of “its continued commitment to the global sustainable fashion movement.” Fashion editors and celebrities were invited to a Parisian film studio, where art director Nicke Bildstein-Zaar referenced the rising oceans by flooding the runway and front rows with water. Ominous images of total eclipses and burning skies brought to mind impending apocalypse.

The Daily Dot has reached out to Balenciaga.

“Climate change but couture,” one quipped in the comments section.

“Global warming but make it fashion,” another joked.

The video was later boosted by another TikTok user, @neostephenism, on Aug. 8. Like many of the commenters on @lucasviegaswk’s video, @neostephenism was critical of the show. In his duet of the clip, the text overlay reads: “All i gotta say is that this is pretty gross. F*ck high fashion.”

He further said in the comments section of the video, “Explanation: high fashion is catered to the rich, who by association are complicit in the very thing this show is portraying.”

@neostephenism’s duet has garnered over 640,000 views since being posted.

Many of the nearly 500 commenters agreed with the irony in the super-rich applauding a spectacle many heavily contribute to and are slamming the fashion brand for appearing to glamorize climate change.

“as art, it’s interesting; with context, we live in the darkest timeline my dudes,” @pyrosul commented.

Some defended the show and Balenciaga, claiming the company was just trying to “raise awareness” but that its messaging may have come across “tone deaf.” “That’s the message behind this collection lol. The irony is it’s commentary climate while being part of the problem itself,” one said.

“Definitely a bit tone deaf considering the audience,” another said.

Daily Dot reached out to @neostephnism and @lucasviegaswk for comment via TikTok message.