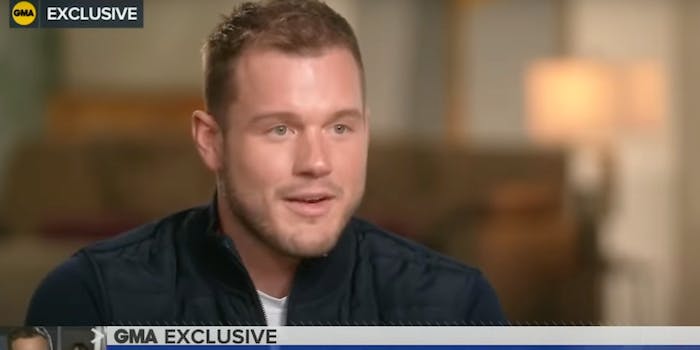 Some people are comparing him to Kevin Spacey, who came out after being accused of sexually assaulting boys.

Allegations of stalking and harassment have resurfaced against former The Bachelor star Colton Underwood after he came out as gay on Good Morning America on Wednesday.

In a clip of his interview with Robin Roberts shared on Good Morning America’s Twitter account, Underwood said he “would’ve rather died than say ‘I’m gay’” and that he “hated myself for a long time.”

“I’m gay, and I came to terms with it earlier this year. I’ve been processing it, and the next step in all of this was sort of letting people know,” he said, taking deep breaths as he spoke.

He went on to say that being in a “dark” place in his personal life pushed him to come out.

“I got into a place for me in my personal life that was dark and bad, and I can list a bunch of different things, but they’d all be excuses,” he said when Roberts asked him about what it felt like to come out.

“But I think, overall, the reason ‘Why now?’ is because I got to a place where I didn’t think I was ever going to share this,” he said. “I would’ve rather died than say I’m gay, and I think that was sort of my wakeup call.”

He also said that this is the happiest and healthiest he has ever been.

His coming out generated a lot of sympathetic posts from well-wishers, prompting him to become a trending topic on Twitter.

“This sweet man my lord. Sending love and peace to anyone feeling this way over who turns you on and who you love,” wrote another. “Fuck anyone judging you. A world of acceptance is waiting for you.”

Soon after, people began flooding the trend with reminders that Underwood once stalked his former girlfriend, Cassie Randolph, according to reports in September.

Underwood chose Randolph to win his season of The Bachelor, season 23, which aired in 2019.

The allegations against him varied from him putting a tracking device under her car to showing up to her parent’s house at 2am and sending her text messages pretending to be a stalker, according to court records obtained by TMZ at the time.

Twitter user Ang Farraguto posted a thread on Wednesday morning, reminding people that they should not look past the abuse allegations against Underwood in light of him coming out. “He’s been radio silent until today. As a queer person watching him use this to ‘come back,’ I’m disgusted,” Ferraguto wrote before outlining the nature of his alleged harassment.

People began comparing Underwood to actor Kevin Spacey, who also came out after being accused of sexually assaulting boys, some as young as 14.

“Seems pretty clear they Colton Underwood only came out in a desperate attempt to evade accountability for being an abuser,” wrote one user, with another calling his coming out after facing the allegations a “Kevin Spacey strategy.”

Others, like Farraguto, noted that “being secretly gay” is “not an excuse for toxic and abusive behavior.”

Underwood also apologized to Randolph during the interview, saying he was sorry for “any pain and emotional stress I caused.”

He said he was in love with her during their relationship.

“I loved everything about her, and it’s hard for me to articulate exactly what my emotions were in going through that relationship with her was because I obviously had an internal fight going on,” he said.

Underwood has not publicly addressed the renewed interest in the allegations against him.

The Daily Dot has reached out to Underwood and will update this report if he responds.