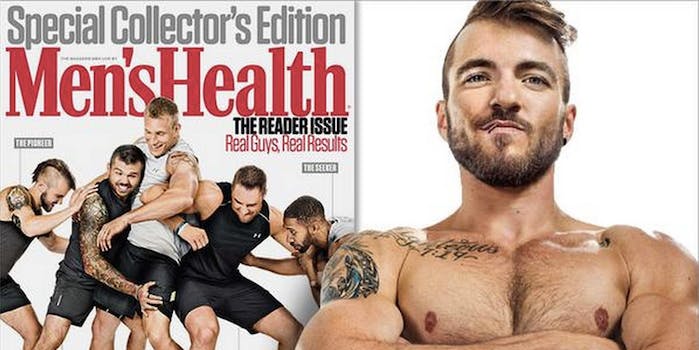 He may not be their 'Ultimate Guy,' but he's still making history.

Transgender model Aydian Dowling announced yesterday on his Facebook page that, despite a massive social media campaign, he did not win the title of Men’s Health “Ultimate Guy” 2015.

In his announcement, Dowling wrote:

“Of course I hold feelings of disappointment for what could have been an amazing opportunity for our visibility as a community. The work we have put in the last six months was and is still completely relevant to our movement to full Transgender Rights and Equality. I would like to fully congratulate the winner – Tim, and ALL the other guys who shared this amazing journey with me!”

Dowling also gave his thanks to the 72,000 voters who placed him top of the Ultimate Guy Leaderboard, achieving nearly 50,000 votes more than the next most popular contestant.

Dowling’s Internet fame surged earlier this year when he recreated Adam Levine’s nude Cosmopolitan cover in FTM magazine’s spring issue, garnering him attention from both LGBT media outlets and the wider press. The picture of Dowling posing proud and naked became an emblem of both trans visibility and body positivity for trans men.

On his Instagram, Dowling said that his campaign to be the”“Ultimate Guy””still opened him up to transphobic abuse. “I was told over and how I do not deserve to be in this magazine,” he wrote. “Every day, over the last six months, [I received] new comments, emails and tags on how a transgender man is not a man—but there we are.”

"We are here to awaken from the illusion of our SEPARATENESS." Thich Nhat Hanh We made history today! We have the FIRST EVER Transgender Male representation in Mens Health, a mainstream men's magazine! This opens the door for more and more opportunities to be seen and heard in our future as a community. Change happens in layers and this is a huge layer we have peeled back! The doors opened with this Collectors Edition cover! I am grateful, proud, and humbled by being the one our community and supporters chose to be the representation for Transgender Men today. We are on that cover- as men. It is important we do not focus on negativity in our time of hurting. I was told over and over how I do not deserve to be in this magazine. Everyday, over the last 6 months, new comments emails and tags on how a Transgender man is not a man- but there we are. Respected by these other 4 men, as well as Mens Health – as men. It wasn't the cover- but that isn't our journey. Our journey is the one that will unfold before us. You can hurt- be angry- or mad, those are all relative feelings. But use those feelings to feel empowered to keep on pushing for our rights and equality as Transgender Individuals. You have not seen the last of us. Grab your copy at shop.menshealth.com or at select stores near you! #inevergiveup #neithershouldyou #humbled #feelingempowered #wearemen #transisbeautiful #mhguycontest #unite #brotherhood @menshealthmag

Dowling has admitted he was pleasantly surprised at the supportive stance of Men’s Health and praised the magazine’s staff for their progressive attitude. In a recent interview with vlogger Raymond Braun, he said, “They’ve [Men’s Health] been really respectful and really trying to educate themselves, which is all I can really ask.”

A collector’s edition of Men’s Health features the five finalists of the “Ultimate Guy” competition, with Dowling labelled as “the pioneer.” This is a label Dowling is happy to own, noting in one of his YouTube videos that trans visibility in the media can only be a positive move forward:

“Imagine if you were a teenager at the grocery store and you saw a trans person on the cover of a magazine. . . What doors would that open in your possibilities of life and happiness? How much confidence do you think you would gain?”

In his Facebook statement, Dowling acknowledged that the fight for trans rights, visibility and inclusion are not over, but that through his Men’s Health campaign,”our community, together with our allies, have made a big mark in the minds and hearts of the mainstream media.”