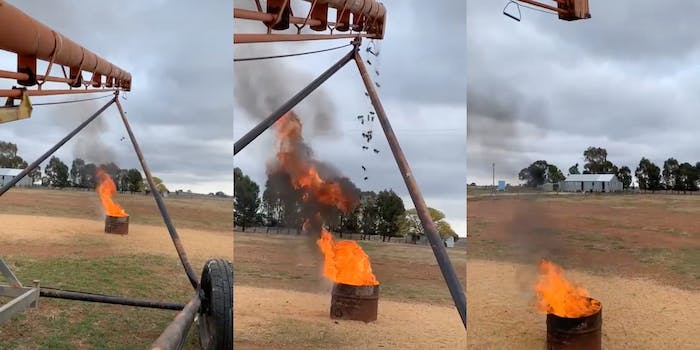 ‘I don’t like mice but that’s messed up’: Farmer burns mice alive to save his crops in viral TikTok—and viewers are divided

'This is brutal but I'm on the farmer's side here.'

A farmer in Australia shared a TikTok video of him burning mice alive in a barrel, and viewers are not happy. TikTok flagged the video as “sensitive content.”

The TikTok shows dozens of mice falling from a grain conveyor belt into a barrel full of flames. Only a few of the mice escape falling into the fire and scurry away.

According to the Daily Mail, the farmer was attempting to save his crops as there is currently a “mice plague” destroying thousands of farmers’ crops, property, and equipment.

One user commented, “I don’t like mice but that’s messed up,” to which the creator replied, “Your (sic) messed up.”

Another user commented, “The lack of empathy people have these days is concerning.”

Not all viewers are concerned, though. Some seemed to appreciate the farmer’s actions, even encouraging the farmer to make the barrel “bigger.”

And some are simply divided. “Yes it’s a problem but really!” one said. “That is so cruel.”

“I HATE the mice , and I get that we cannot have them on the farms like this. but burning them alive…” another said.

“This is brutal but I’m on the farmer’s side here,” a third wrote.

A consecutive TikTok video shows several mice falling from the conveyor belt into an empty barrel with no fire. The farmer captioned it, “Catching them to give to all the snowflakes.”

@andyj3825 did not respond to the Daily Dot’s request for comment by the time of publication.