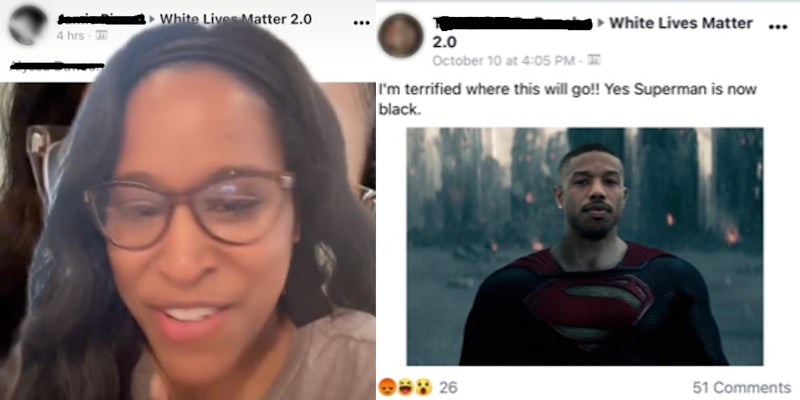 'They don’t deserve a space on any platform.'

The Black TikToker who’s known as “Aunt Karen” says she is “infiltrating” Facebook groups that have “white lives matter” and other white supremacy messaging in an effort to expose racism and get them removed.

“We have to take this group down,” Denise Bradley says in a now-viral video on Oct. 10. Since being posted, the video has been viewed more than 240,000 times.

Bradley shared screenshots of posts in a Facebook group of white people saying they’re “terrified” of Superman being Black alongside a photo of Michael B. Jordan in a Superman costume.

She has a simple purpose: dismantle these groups.

“I want them to feel uncomfortable,” Bradley told the Daily Dot. “They shouldn’t be able to display so much hate and bigotry. They don’t deserve a space on any platform.”

In the video, she mentioned she was part of a White Lives Matter 2.0 group, but the page was unavailable within a day of her video being posted. Bradley told the Daily Dot that she was still able to access the group as of Oct. 11 and that it likely became a secret group.

Facebook told the Daily Dot on Tuesday that upon review of comments, the platform removed the White Lives Matter 2.0 group due to its violation of the community standards of the platform.

Bradley says her activities in white supremacy groups include having her friends join them and spam the groups with messages on “unity and positivity.” She did not share the content of these messages when repeatedly requested.

Despite the removal of White Lives Matter 2.0, Facebook is rife with groups of similar messages that advocate the “white lives matter” rhetoric.

As of Wednesday, there were as many as 17 “White Lives Matter” groups on Facebook, along with groups supporting “blue lives” or “police lives.” The slogans often carry undertones of anti-Black racism.

The groups vary in membership from a few dozens to hundreds. Many of them operate on the idea that because the Black Lives Matter movement can exist, they ought to be able to have a similar group for white people, a concept that has been determined to be explicitly racist by the Southern Poverty Law Center.

The Facebook groups spew all kinds of anti-Black messaging, including referring to Black people as “lazy,” a stereotype perpetuated against African Americans that uses statistics of welfare and joblessness in the community against them while ignoring the systematic oppression that leads to such challenges.

The Black Lives Matter organization, which is named after the protest slogan, arose in response to police killings of Black Americans such as Eric Garner and last year intensified after police killed Breonna Taylor and George Floyd.

In a follow-up video posted on Oct. 15, Bradley showed a few more images from the “White Lives Matter 2.0” group: One post claimed that characters in The Baby-Sitters Club on Netflix have asked people to donate to Black Lives Matter and The Trevor Project, a nonprofit aimed at preventing suicide among LGBTQ youth.

“Devils children coming after us,” one user commented on the post.

Stars from the show have used their personal social media platforms to support the organization and direct their followers to Black Lives Matter resources.

Bradley believes the only way to address these comments is to take the groups down.

“The important part is to dismantle the group. My goal is that the public will take notice and Facebook will remove the group as well,” she said.

When she and her friends post or comment in these groups, they also question the “open display of racism,” she told the Daily Dot.

The campaign comes at a price. In her Oct. 10 video, Bradley said that some of the members of the White Lives Matter 2.0 group figured out her agenda and tagged her profile in their posts, calling for her personal identifying information to be shared online. Other posts about her included a pro-Nazi meme and referred to her as a “sub-form of a human.”

“Someone mentioned trying to sue me,” she said. “I’m always worried about my safety.”

Facebook’s community guidelines state that the platform “remove language that incites or facilitates serious violence.” Following the Daily Dot’s request for comment on the post, Facebook said the group had been removed.

Despite the brazen nature of the comments, Bradley says she is not discouraged.

“What calms me is the understand of my purpose,” she said. “If anything I do can help take another step towards the end of racism, I’m going to do it.”