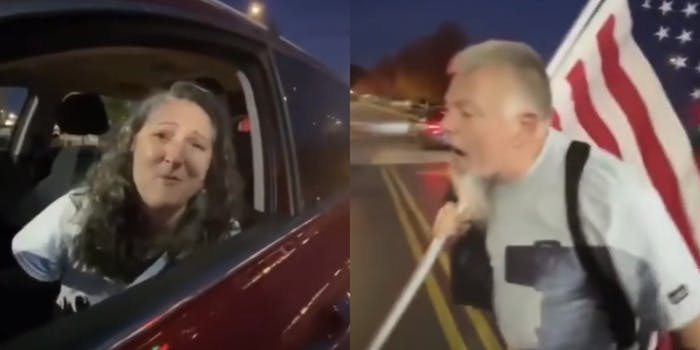 'If all lives matter, why is he protesting a vigil?'

A newly viral Reddit video shows a woman arguing with an armed supporter of President Donald Trump who repeatedly yells “all lives matter” at a vigil for a Black man shot and killed by police.

The vigil took place on Oct. 30 in Vancouver, Washington, to honor 21-year-old Kevin Peterson Jr., who was shot and killed the previous evening during an encounter with three Clark County Sheriff’s Office deputies, CNN reports. The deputies reportedly approached Peterson while he was sitting in his car in a motel parking lot on the suspicion of selling drugs. The officers reportedly followed Peterson after he fled the scene on foot. Peterson later produced a handgun and encountered the three deputies, all of whom shot at him.

Hundreds of people gathered at the ensuing candlelight vigil for Peterson, chanting “Black Lives Matter” and his name. But another group of American flag-waving, gun-toting Trump supporters also gathered near the vigil, reportedly getting into shoving and screaming matches with the mourners.

A Reddit video uploaded on Wednesday shows one such altercation. The video is ripped from a TikTok uploaded by @acabnews12 that has earned 3 million views. It begins with a therapist named Sabrina Sheehy talking to the cameraperson from her car, defending BLM and condemning the nearby Trump supporters.

“What’s wrong with them?” Sheehy asks. “This is a fucking vigil for this poor man who was shot 16 times. This is bullshit. They have the nerve to show up in here. I don’t give a shit how many people are honking at me. My name is Sabrina Sheehy. I’m a therapist. I love people of color. If you need mental health coverage—”

“Are you a Christian?” Sheehy asks him.

“Yeah I am, and all lives matter!” he replies.

“How dare you?” Sheehy asks the man. “Black people are being killed, you motherfucker!”

“Oh yeah? When they commit crimes!” the man retorts. Sheehy argues that Peterson “was running away,” which the man says doesn’t matter because “he broke the law.”

“I don’t care!” Sheehy yells at the video’s conclusion.

In the roughly 16 hours since the altercation was uploaded to the r/PublicFreakout subreddit, it has earned more than 7,400 upvotes. Many commenters applauded Sheehy’s passion for social justice while slamming the Trump supporter, who had the audacity to call himself a Christian while suggesting that Black people deserve to be shot and killed for breaking the law.

“What they mean by ‘ALL LIVES MATTER’ is: ‘when it comes to boot licking, we treat all people the same. We didn’t give a fuck about the murder of Kelly Thomas, Ryan Whitaker, Daniel Shaver, Justine Damond, Duncan Lemp or any of them and we certainly don’t give a fuck about Blacks,’” one user wrote. “They’re solely there to celebrate death and mock those that care.”

“When I showed up for the vigil and saw numerous Trump supporters waving flags and Proud Boys armed to the teeth with weapons, I was disgusted,” Sheehy told the Daily Dot. “What kind of people show up to protest and incite violence and hatred at a vigil for a dead young man?”

She continued: “When this man mocked me and screamed ‘he was a criminal’ and ‘all lives matter,’ I couldn’t contain my disgust any longer. I’d wish I’d asked that man if he’d ever gotten a traffic ticket or if he’d consumed alcohol before the age of 21? By his logic, does he deserve to be shot to death?”

Update 2:50pm CT, Dec. 1: This story has been updated with a quote from Sheehy.