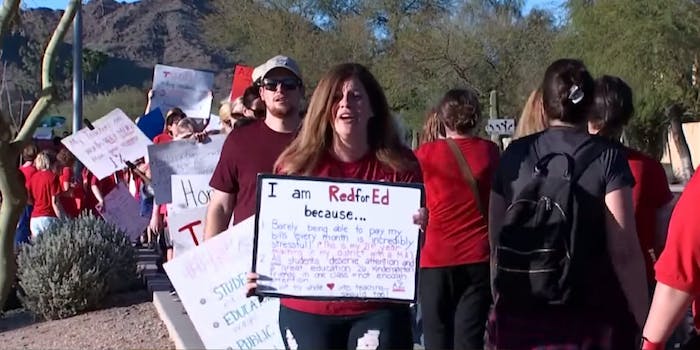 It's the third statewide teachers' strike this year.

After teachers in West Virginia and Oklahoma went on strike over low pay and inadequate funding, Arizona teachers are ready for a walkout of their own. The state’s educators voted Thursday to strike next week, making Arizona the third state in the past year to host a statewide teacher walkout.

The teachers’ strike, which begins on April 26, comes after Arizona Gov. Doug Ducey (R) proposed a 20 percent increase in teachers’ salaries by 2020, which would start in 2019 with a 9 percent increase, NPR reports. However, teachers fear the plan will not benefit the state’s education system in the long-term, as teachers also need funds for better educational resources.

Teachers instead want the state to increase funding levels to those of Arizona’s 2008 educational budget, improve pay for school support staff, create a permanent salary structure with annual raises, and halt tax cuts to the education budget until Arizona’s funding per pupil reaches the national average level, the Arizona Republic reports.

“We are underfunding our students,” Arizona Educators United organizer and teacher Noah Karvelis told the Republic. “We are throwing away an entire generation of students’ opportunity of academic success.”

Now that 78 percent of 57,000 state educators voted to strike, protesters are banding together under the hashtag #RedForEd, a grassroots campaign that originally began with teachers wearing red to raise awareness for improving school districts’ work conditions and education resources. Teachers, activists, supportive politicians, and their allies are now using the hashtag both offline and on Twitter for the upcoming strike as they continue to demand change from the state government.

I've been part of AZ's public school system in one way or another since I was 5. In all those years, I've never felt like I do tonight. I choked up as walkout was announced because our politicians have driven us to a point where things are so bad that this is necessary. #RedForEd pic.twitter.com/CaLjSvk8po

Seen today on Arizona roads as we travel the state. Countless Arizonans are #RedForEd! pic.twitter.com/cUZ95prmuo

Remember, our Arizona Government has cut taxes EVERY. SINGLE. YEAR. (apart from one year, and even following the 2008 recession) going back to 1990. This was never sustainable, arguably reckless, and now leads us to this current tipping point. #RedForEd

AZ was above the national average in state funding for public education until about 1990 and we have been below national average ever since. The legislature has cut taxes every year but one since 1990 reducing state revenues by $4.4 billion annually. #RedforEd

We support our teachers. Do the right thing, Arizona. #RedForEd @AZEdUnited pic.twitter.com/cJrQCKUvzV

Went out to dinner tonight in my #redfored shirt… my server told me she liked it because she is a teacher.
Let that sink in. @RED4ED1 @dougducey @sosarizona @arizona_sos

Just like in West Virginia and Oklahoma, teachers are ready to protest in person to pressure the government to support educators.

Staff and students walking into campus in support of #RedForEd pic.twitter.com/h7lRdbG2pg

Oklahoma recently ended a nine-day strike after the state Senate agreed to increase education funding to around $40 million. Oklahoma Education Association President Alicia Priest has since called for teachers to focus on this year’s upcoming midterm elections in order to make sure teachers’ demands are met, NPR reports.