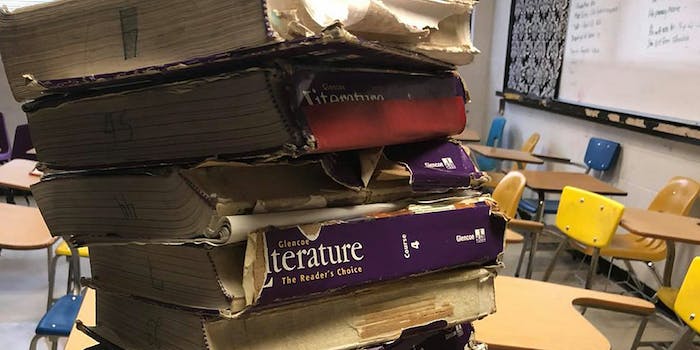 Some Twitter users say they used the same books decades ago.

Teachers first turned to the internet last month in preparation for the Oklahoma Teacher Walkout, a planned strike for April 2 citing low pay for teachers and unacceptable school funding from the state. Oklahoma ranked 49th in the nation in 2016 for average teacher’s salaries, Time Magazine reports, and despite a raise from the legislature, teachers feel their needs as educations were not met—hence, the strike.

Through photos of barely usable supplies, teachers started going viral, showing just how terrible funding is for education. Old textbooks from the 2000s are used throughout classrooms, PBS reports, meaning teachers are left with unreliable and inaccurate resources that need to be updated. Many books are falling apart, too, with covers ripped off.

Meanwhile, desks and chairs often break down without replacement, posing safety hazards to students. In one case, English teacher Sarah Jane Scarberry from Heavener High School claims students have to put together usable parts from broken desks to create new ones for class.

“I will say, our district does try very hard to supply our needs,” Scarberry told PBS. “But not all needs are met and quite frequently we know better than to even ask.”

As the strike continues, photos also continue to circulate on Twitter and Facebook, demonstrating just how underfunded Oklahoma public schools are.

One of the reasons it’s not over yet…This is a textbook from my daughter’s class. It’s a history book and the current President in it is George W. Bush. We can do better Oklahoma. #OklahomaTeacherWalkout#oklaed #oklaleg @gophouseok @oksenategop @housedemsok @oksenatedems pic.twitter.com/F5FE3JcFQh

Two Oklahoma teachers shared these photos w/ me. Their students use these textbooks. It blows my mind. pic.twitter.com/kF6Azdlgy4

Ok here’s my story and why I’m walking out. This is my fourth year teaching in Oklahoma and after taxes and insurance I…

The general Twitter public has mostly responded in shock and horror at the schools’ conditions. Some are calling on the federal government to help fund Oklahoma’s schools.

Good grief! Hey Trump..how about you cut back a couple of golf days with it’s horrendous cost to taxpayers and send that money to help the schools in OK?

It baffles me especially with ALL the Oil & Gas Companies that OK Schools are 50th. 50th.

for people saying the covers don’t matter, a book doesn’t make it to this condition without losing pages too.

Several adults even recognized the textbooks in use—from decades ago.

I live in Oklahoma and can confirm that is the Literature book I had in highschool. Same for a History book I've seen in another picture. I graduated in 2002.

I’m 11 years older than my sister. She told me today she saw a textbook with my best friends name in it. WHY ARE OUR STUDENTS USING 11 YEAR OLD TEXTBOOKS?? #oklahomateacherwalkout

I recognize at least two of those books. I graduated HS 23 years ago.

Oklahoma isn’t the first state to go on strike for fair funding and teacher’s salaries. West Virginia, which also ranks low in the U.S. for public school funding, went on strike earlier this year. As teachers continue to push back, the walkouts suggest that the U.S. has a larger problem with properly funding public education.