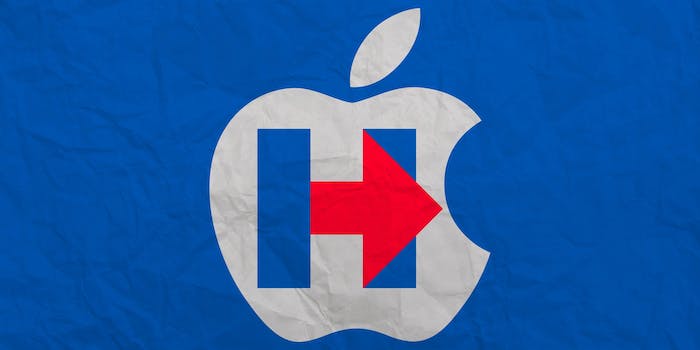 Clinton's team wasn't quite so convinced.

Hillary Clinton won points in Silicon Valley after taking a “nuanced stance” on encryption and the technology industry, a leaked email from an Apple executive shows.

“I wanted to reach out to say thanks for the principled and nuanced stance the Secretary took last night on encryption and the tech sector,” Jackson, a former administrator at the Environmental Protection Agency during Clinton’s stint at the State Department, wrote. “Leadership at Apple certainly noticed and I am sure that is true though out the Valley.”

Jackson’s email came amid an ongoing debate over law enforcement access to encrypted communications after the FBI attempted to force Apple to decrypt a locked iPhone owned by one of the terrorists who on Dec. 2, 2015, killed 14 people in San Bernardino, California.

Asked by the debate moderator whether Clinton would support backdoors into encrypted technologies—a secret weakness in the code, in other words—Clinton said she “would not want to go to that point.” Clinton continued:

I would hope that, given the extraordinary capacities that the tech community has and the legitimate needs and questions from law enforcement, that there could be a Manhattan-like project, something that would bring the government and the tech communities together to see they’re not adversaries, they’ve got to be partners.

It doesn’t do anybody any good if terrorists can move toward encrypted communication that no law enforcement agency can break into before or after. There must be some way. I don’t know enough about the technology, Martha, to be able to say what it is, but I have a lot of confidence in our tech experts.

And maybe the backdoor is the wrong door, and I understand what Apple and others are saying about that. But I also understand, when a law enforcement official charged with the responsibility of preventing attacks—to go back to our early questions, how do we prevent attacks—well, if we can’t know what someone is planning, we are going to have to rely on the neighbor or, you know, the member of the mosque or the teacher, somebody to see something.

I just think there’s got to be a way, and I would hope that our tech companies would work with government to figure that out. Otherwise, law enforcement is blind—blind before, blind during, and, unfortunately, in many instances, blind after.

So we always have to balance liberty and security, privacy and safety, but I know that law enforcement needs the tools to keep us safe. And that’s what I hope, there can be some understanding and cooperation to achieve.

Jackson added in her email to Podesta that Apple “will continue to work with law enforcement.”

Jackson continued: “Thousands of times every month, we give governments information about Apple customers and devices, in response to warrants and other forms of legal process. We have a team that responds to those requests 24 hours a day. Strong encryption does not eliminate Apple’s ability to give law enforcement meta-data or any of a number of other very useful categories of data.”

Emails from Clinton’s technology team, also released by WikiLeaks, shows her own technology advisors were less enthused about the candidate’s response than Jackson was due to concerns that her stance on the issue was not fully fleshed out.