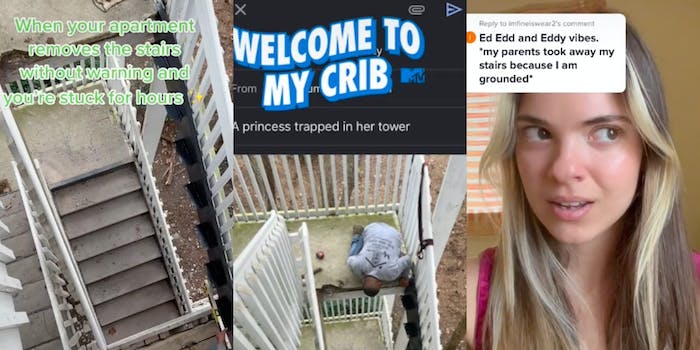 ‘They were definitely causing a fire hazard’: TikToker gets trapped in her apartment after complex removes staircase without notice

Management told her they were unaware that the stairs were being worked on.

When the owners of apartment buildings do any sort of construction, tenants typically expect to be notified in advance. This wasn’t the case for Olivia Crump (@foodbattle2008), who says she was stuck in her apartment for hours because her complex removed a staircase without notice.

In the video that Crump posted on Monday, she records the stairs leading outside of her apartment where a big portion is missing. She also included a screenshot of an email she sent, presumably to her building management, with the subject line that says, “A princess trapped in the tower.”

The video gained over 526,000 views and received comments making jokes about the situation and giving advice. “Call the fire marshal. It’s a nice hefty fine for them,” one person commented. Another person wrote, “Against Fire Code. Sue them for endangerment.” A third person said, “Ed Edd and Eddy vibes. *my parents took away my stairs because I am grounded.*”

Crump told the Daily Dot that she realized she was trapped after her neighbor informed her the stairs were missing.

“It was impossible to get down without climbing over the ledge with a ladder or scaling the side with a decent drop below,” she said. “My apartment complex didn’t notify any of the residents beforehand (and still hasn’t reached out since this happened). We were stuck for nearly 4 hours until the worker finally told me I could come down, and me and my dog hopped an unfinished step so I could let her outside. I called the apartment too and they told me they didn’t know the stairs were being worked on.”

She said she was not offered compensation, but she does not intend on taking legal action.

“They did this on two buildings that I know of and no one has heard a peep from them. I have no plans to pursue legal action although I’m sure I could, because they were definitely causing a fire hazard,” Crump says. “I do think it’s more than fair that they give us some form of compensation for putting us in a dangerous situation without warning, but it doesn’t seem like they plan on doing that!””