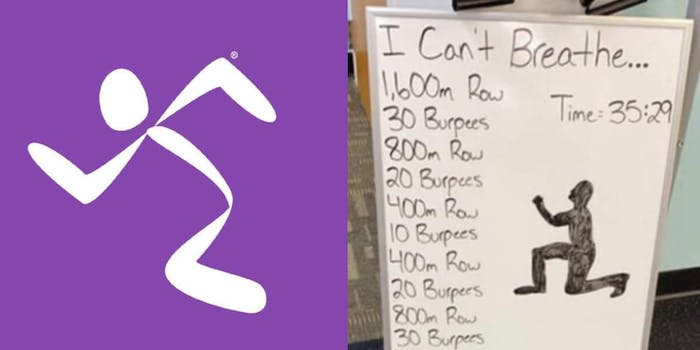 The workout was supposed to honor Floyd and be 'so hard that we felt what he felt.'

A Wisconsin gym is facing backlash after it advertised an “I Can’t Breathe”-titled workout, which was reportedly created in honor of George Floyd and to show support for the Black Lives Matter movement.

“And don’t you dare lay down,” the sign reads at the end.

Next to the list of sets is the drawing of a man on one knee. Ex-officer Derek Chauvin was seen kneeling on Floyd’s kneck prior to his death. Chauvin has since been charged with murder.

Jen Dunnington, co-owner of the Anytime Fitness branch in question, told TMZ that this was a trainer’s way of trying to “honor” Floyd. The workout was supposed to be “so hard that we felt what he felt.”

Many shared their anger for the tone-deaf sign of “support.”

In a statement issued on Facebook Wednesday, the company said it was “extremely disappointed” to learn about the sign and that the trainer involved has been “placed on leave,” with his employment status “under review.”

“Regardless of their original intent, the actions of the Wauwatosa location were offensive, insensitive and inconsistent with our brand values,” the statement reads. “We understand the deep hurt that this gym’s actions have caused for many of our members, and we truly apologize that this happened.”

The Daily Dot has reached out to Anytime Fitness.

Dunnington “deeply” apologized to TMZ, saying she “didn’t read (the sign) in that way.” She also reportedly posted a video apology to one of the gym’s social media pages but ended up deleting it.