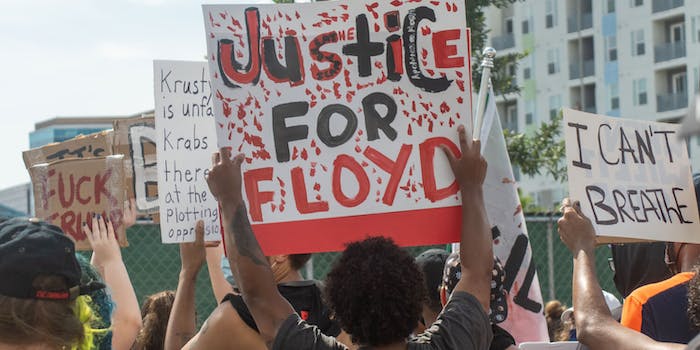 Ron Johnson has been placed on leave.

Video game development company Riot Games placed one of its executives on leave after he shared a Facebook post that de-emphasized police’s killing of George Floyd, according to the Hollywood Reporter.

Ron Johnson, global head of consumer products at Riot Games, wrote that Floyd’s death was “a learning opportunity for people (and your kids) to teach that this type of criminal lifestyle never results in good things happening to you or those around you.”

The image Johnson shared included a list of Floyd’s criminal records and said: “The media and the left have made George Floyd into a martyr. But who was he really?”

Riot Games was made aware of the social media post and launched an investigation, Vice reports.

“We’ll say firmly that the sentiment in that image is abhorrent, against our values, and directly counter to our belief that addressing systemic racism requires immediate societal change,” Riot Games told Vice in a statement. “While we don’t discuss the details of our investigations or their outcomes, we’re following our disciplinary process closely and have placed him on leave pending its conclusion.”

Riot Games, which did not immediately respond to the Daily Dot’s request for comment, issued a statement on June 5 addressing Floyd’s murder. In the letter, the company’s president, Dylan Jadeja, wrote that “like many other companies with the ability and responsibility to accelerate progress, and to make it a reality, we have a part to play and it is on us to do more.”

In response to Johnson’s post, some are calling for the executive’s termination.

One individual tweeted that “if Ron Johnson is not fired from the company, I will never again play any of your games/products.”

Another tweeted that this is “white privilege at its finest.”

Update 10:20am CT, June 12: Ron Johnson is no longer employed at Riot Games, a spokesperson for the company told the Daily Dot.

“The sentiment expressed in the image in question is abhorrent and runs directly counter to our values and our belief that addressing systemic racism requires immediate societal change, something that we’re committed to working toward,” the spokesperson said.