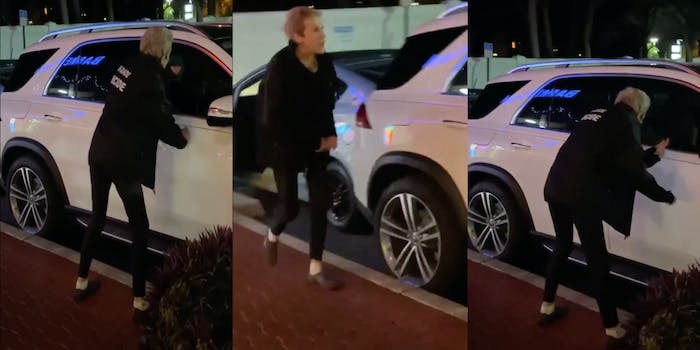 Sordid details of a woman’s past emerged after video footage of her recent anti-Semitic rant began circulating on Tuesday night.

The Jan. 30 outburst was prompted by a parking dispute, the Miami New Times reports. As the footage spread online, people unearthed details about the woman’s past. It turns out the investigation that followed the incident wasn’t the first time she’s been investigated for vehicle-related crimes.

The viral rant reportedly took place after 64-year-old Leslie Socolov, a retired Miami-Dade Police Department employee, discovered a car parked behind her own at a restaurant in Boca Raton, Florida. Socolov became enraged when the other driver, a 78-year-old man, didn’t immediately move his vehicle, and she began screaming obscenities and demanding that he move.

“Move your fucking car, you stupid Jew!” a maskless Socolov screams at the elderly man in the video. “Just because you’re Jewish and a Democrat doesn’t give you the right to stay there. Move it! Move it!”

What the viral video didn’t capture was the moment Socolov reportedly rammed her car backward into the elderly man’s SUV, per the arrest report.

By the end of the 25-second clip, Socolov is pounding on the man’s car windows as she screams. Her jacket reads “Miami-Dade Homicide,” which helped people track down her details.

The elderly man inadvertently did Socolov a favor. While she was booked on misdemeanor charges of DUI and disorderly intoxication, she likely would have been slapped with a far harsher punishment had she been able to leave. Her breath-alcohol level was between .151 and .157, nearly double Florida’s legal driving limit of .08.

Had she been able to drive away, Socolov would have been a danger to anyone else on the road—a reality made more harrowing by the fact that, in May of 2015, Socolov struck and killed 69-year-old Vietnam veteran and war hero Richard Flaherty a block from her home. She fled the scene, leaving Flaherty’s body to be discovered by joggers the next morning.

A traffic homicide report reviewed by the Miami New Times states that Socolov arrived home around 12:41am, noted the damage to her car, and witnessed police gathering at the hit-and-run site, but did not approach the officers about her involvement. She did, however, call her insurance company to make a claim.

Socolov didn’t report her involvement in the hit-and-run until some time later, after seeking advice from a detective coworker. Detectives discovered blood that matched Flaherty when they searched her vehicle. Despite this, Socolov received no punishment.

The Miami-Dade State Attorney’s Office excused the lack of charges on the claim that there is no proof Socolov knew she struck a person before fleeing the scene. She continued working for the police department until her retirement last year.

The Miami-Dade Homicide jacket Socolov wore during Saturday’s anti-Semitic rant caught the attention of the Miami-Dade Police Department. The department announced in a tweet it would investigate the incident but gave no further details.

Socolov’s arrest report lists her as Jewish, according to the New Times. In an interview with the Miami Herald, she claimed that she couldn’t be anti-Semitic because she is Jewish herself. She insisted to reporters that she was calling the man “you” rather than “Jew,” but the footage clearly disputes this claim.

According to the Herald, Socolov also railed against Democrats throughout the “profanity-laced interview.”

“I’m not anti-Semitic. I’m getting persecuted,” she said. “Look at these Democrats getting away with bullshit.”