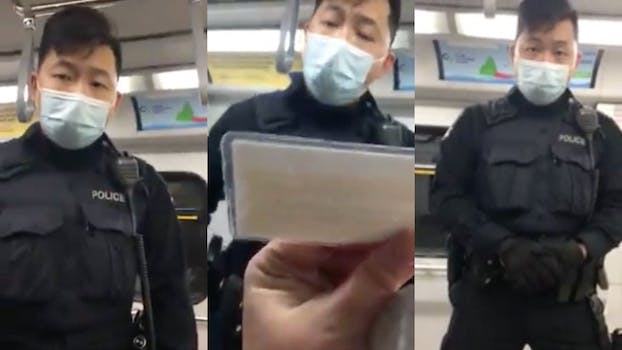 'I need healthy air exchange in my mouth.'

A new viral video shows yet another anti-mask “Karen” refusing to wear a mask on public transit and getting arrested after berating an incredibly patient police officer for several minutes.

The initial incident took place on Dec. 5, 2020 in Vancouver, Canada, Vancouver Is Awesome reports. The anti-masker, identified by Rebel News as Valerie Ann Foley, was riding the TransLink SkyTrain when Transit Police Officer Constable Peter Kwok asked her to mask up.

The ensuing 11-minute video rocketed to the top of Reddit’s r/PublicFreakout after less than a day, collecting more than 76,000 upvotes and hundreds of awards. It begins as most of these exhausting exchanges do, with Foley attempting to “educate” Kwok on her rights.

Foley accuses Kwok of “harassing” her, despite his calm demeanor. She repeats that she is “medically exempt” from following any mask requirements, repeatedly flashing a laminated card—which Kwok calls “invalid”—as proof of her exemption. Foley even accuses Kwok of making her feel unsafe, due to his proximity. From someone refusing to put a piece of cloth over their mouth, the demand that someone else maintain a six-foot distance is bold.

By the four-minute mark, Foley is all but shouting. At one point, she claims that she can’t wear a mask because, “I need healthy air exchange in my mouth.”

After enduring more than five minutes of the anti-mask Karen’s abuse, Kwok finally informs her that he will arrest her if she does not don a face covering. She begins to bellow at this point, telling the officer to get away and “respect my social distancing.”

When Kwok begins to physically arrest her, Foley absolutely loses it. She screams that he is a “male officer” and therefore cannot touch her. In the background, other passengers appear to be encouraging Kwok to “get her off.”

Foley puts up a good fight, but Kwok eventually arrests her and removes her from the train. She continues to scream obscenities at him, calling him a “pig” and accusing him of assault.

People in the comments collectively cringed over Karen’s antics. Several viewers were particularly stunned by her attempt to pull the “woman card.”

“I cringed on behalf of all women when she tried to play the ‘woman card’ while swearing and berating the police officer,” one viewer commented.

“She went through the whole dictionary of ‘trigger words,'” another commenter wrote.

In the end, Foley received a Provincial Violation Ticket under the COVID-19 Related Measures Act, according to Vancouver Is Awesome. Karen’s anti-mask antics ultimately earned her a $460 fine and a charge of assaulting a police officer, Rebel News reports.