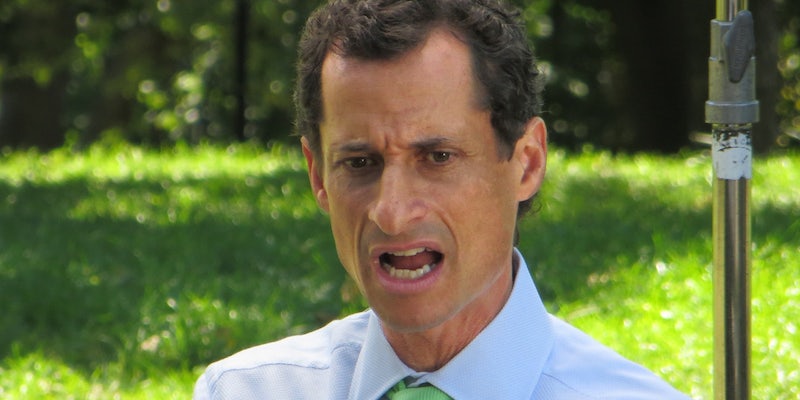 Anthony Weiner has been caught in sexting scandals numerous times in his political career, but so far, it’s always been with other consenting adults. However, in an exclusive with the Daily Mail, a 15-year-old girl claims she engaged in a months-long relationship with Weiner, and that he was fully aware of her age.

In response to the accusations, Weiner told the Daily Mail, “I have repeatedly demonstrated terrible judgment about the people I have communicated with online and the things I have sent.”

But as many point out online, his actions exceed “terrible judgment” and qualify as predatory, even pedophiliac.

Anthony Weiner is so disgusting. I hope he’s charged. No mercy for child predators: https://t.co/h4Fcbss4rY

Others seem to have Weiner-scandal fatigue.

Whenever Anthony Weiner is trending, it's never good news…

Weiner’s wife and Hillary Clinton aide, Huma Abedin, announced their separation during his last sexting controversy in August, which included her husband sending pics of his pants’ bulge alongside their infant son to an unnamed woman. While the end of his marriage and political career seemed like justice enough for Weiner, allegedly soliciting sex from a minor could land him in jail.

It remains unclear if the teenager has spoken to authorities about the sext exchanges.