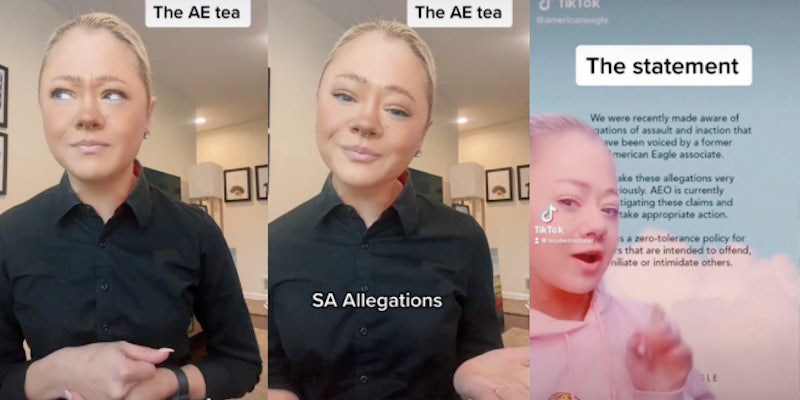 ‘I’ve brought all these concerns to HR and your major concern is my TikTok videos?’: American Eagle worker says HR ‘gaslit’ her into thinking her TikTok videos were hurting the brand

'Jokes on them we all thought you worked at VS Pink.'

An American Eagle associate says she quit her job at the company after HR “gaslit” her into thinking her TikTok videos were hurting the brand.

The TikToker, Ellen (@tacobellrockstar), has about 494,000 followers and is known for posting POV videos about her job as a retail worker. She says her videos seemed to resonate with viewers who also work in retail, but American Eagle was not a fan.

In a recent video, the TikToker details her experience with the company’s HR department. She says she started creating the POV videos almost a year and a half ago. The videos highlighted things she experienced with managers, “Karens,” and other store associates. When “higher-ups” at the company saw her viral videos, they quickly brought her in to speak with HR, Ellen says.

The first time she was brought into HR, Ellen resolved to “adjust” how she made her TikTok videos, even though they never explicitly mentioned American Eagle, she says. She was brought into HR two more times, and each time, she says she brought up “very real, very serious things” that were going on within the company. She claims some of those things included sexual assault allegations.

When she met with HR a third time, Ellen says she was “gaslit” into thinking she was the problem.

“I have brought all of these major concerns to you, and each time I’ve come into HR, your major concern is my TikTok videos. What?” Ellen says in the video, retelling what she told HR. “I’m like shaking thinking about it because it still blows my mind that these things were going on, and my TikTok videos were a giant concern.”

After that meeting, Ellen quit immediately. Then, she says she exposed the company on social media, calling them out for the issues they ignored during their meetings. She says her followers blew up American Eagle’s comments and mentions on social media and eventually forced the company to turn off their comments.

Ellen claims that the social media bombardment eventually led American Eagle to release a statement on their social media in July 2021.

“We were recently made aware of allegations of assault and inaction that have been voiced by a former American Eagle associate. We take these allegations very seriously,” the statement reads. “AEO is currently investigating these claims and will take appropriate action. AEO has a zero-tolerance policy for behaviors that are intended to offend, humiliate or intimidate others.”

A statement from AE.

The TikToker doubts the company actually did much beyond release the statement, she says.

“I still truly don’t believe that they really made much of a change,” Ellen adds in her video. “They did sensitivity training, and I got my eyes on the inside, but they’re just a shitty company.”

While supporting Ellen and her videos, most viewers admitted they didn’t even know what company the TikToker worked for based on her POV videos—seeming to prove that the videos weren’t hurting American Eagle’s brand.

“Jokes on them we all thought you worked at VS Pink,” one viewer commented.

“I thought u worked at victoria secret the whole timee,” another viewer commented. In reply to that comment, Ellen wrote, “Lots of the content I make is about my time there too, but goes to show that just like I told AE, known hardly even knew where I actually worked.”

Other viewers said they were sure Ellen worked for either Old Navy or Forever 21.

“I never cared where you actually worked—your videos spoke to the retail experience we’ve all shared across hundreds of stores,” one user commented. In reply, Ellen wrote, “THIS!! This was the whole point of why I started doing my videos! We are all in it together & knowing you’re not alone is so important [red heart emoji].”

In a different comment on the video, Ellen said, “The fact that you all thought my videos were about various stores really shows me how toxic so many companies actually are [embarrassed emoji].”

The Daily Dot reached out to the creator via TikTok comment and to American Eagle via email.