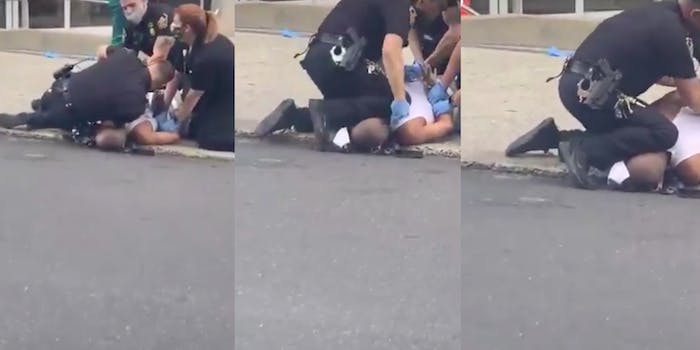 'People think that it couldn’t happen here and it has been happening and it happened yesterday.'

A video of a group of police officers from Allentown, Pennsylvania shows one of the cops kneeling on the neck of a person being arrested–– just weeks after the police department had reformed its restraint policy, banning neck restraints and chokeholds.

The video of the police officer kneeling on the man’s neck prompted widespread backlash because it was the same restraint method that caused George Floyd’s death back in May. Floyd’s death sparked Black Lives Matter protests around the world and in the nation, which are still going on today.

“We’re done,” Parker said to CBS Philly. “People think that it couldn’t happen here and it has been happening and it happened yesterday. So enough is enough.”

The incident was recorded last Saturday in front of the Sacred Heart Campus at St. Luke’s Hospital. According to the statement released by local authorities, the police were responding to another call when they saw the man reportedly stumbling in the streets, blocking the driveway to the ER, and vomiting. The man was allegedly spitting and yelling at anyone who tried to talk with him.

“The individual continued to be noncompliant which required officers to restrain the individual and the hospital applied a spit shield,” the Allentown Police Department said in a statement. “The male in question was escorted into the hospital for treatment. The male was treated and later released.”

As outrage against the video grew, Allentown Mayor Ray O’Connell and Police Chief Glenn Grannitz said they’ve launched an investigation and that the public should expect videos of the incident to be released. But the citizens of Allentown are asking for more.

After the video was released, protesters gathered outside of the police station. There are other planned protests in the community.

Nobody in the video has been identified yet.