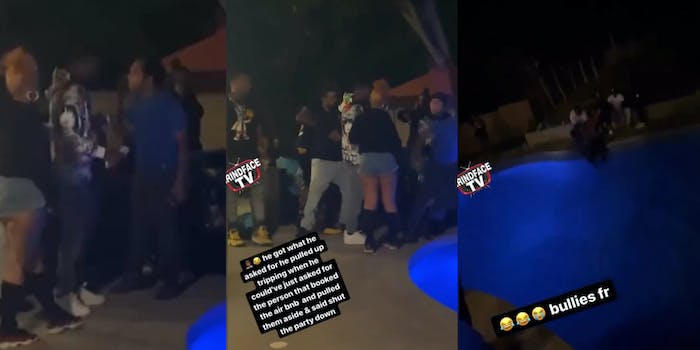 ‘What’s sad is people think this sh*t is cool’: Video shows people allegedly pushing Airbnb host into his own pool after he asks them to shut party down

The crowd continues to jeer at and mock the man as he is in the pool.

A video posted to the r/PublicFreakout subreddit shows a group of partygoers pushing a man into a pool.

The video is filmed by one of the people attending a large party, which is allegedly being held at an Airbnb, according to the caption. The large group of people is gathered outside, around a pool, in an area that appears to be surrounded by residential properties. A man identified by the person filming as the owner of the property can be seen arguing with several members of the group. The majority of what the alleged property owner says is lost to the surrounding noise, but he does appear to mention the fire department.

The alleged Airbnb host gets increasingly irate as he speaks, before being abruptly cut off when one of the partygoers leans forward and roughly shoves the man into the pool. He tumbles backward into the water as the group crows and laughs, only to surface a moment later, seemingly unharmed.

The man makes his way to the edge of the pool as the group exchange high-fives and congratulate themselves. His attempt to get back on dry land is thwarted by two men, who wait until the man has pulled himself fully out of the water before shoving him back into it. He tumbles backward, again, into the pool as the person filming aptly notes that their companions are “bullies.”

Other partygoers gather around the pool to jeer at the alleged host, who makes one more attempt to climb out of the pool. His final try is blocked more quickly, as the same two men lunge in and again shove the man backward into the water. The caption shifts to note that the person behind the camera “felt bad for recording.”

The final moments of the video center on the alleged host, who ultimately recognizes that he’s not going to get out of the pool anytime soon. Instead of making another attempt for the sides, the man simply swims to the pool’s shallowest area to wait. One of the men who blocked him from exiting the pool appears to throw something at the the man in the pool as he makes his way past.

The crowd continues to jeer at and mock the man, calling him a “p*ssy” even as they surround the pool, preventing him from any attempts to exit. The man is still in the water when the clip ends.

A spokesperson for Airbnb told the Daily Dot via email that the company has “no information beyond what’s in the video and” that it does “not know if this actually happened in an Airbnb listing.”

“If we receive information indicating it was an Airbnb listing or reservation, we will of course investigate immediately,” it added.

The all-too-brief one-minute clip was posted to Reddit less than 15 hours ago, and quickly went viral. In the 13 hours its been up, the video has earned more than 6,000 upvotes and dozens of comments from furious viewers, many of whom found themselves disgusted by the behavior displayed by the people attending the party.

Between noting that “these people have no redeeming qualities,” and pointing out that the video also “belongs on r/iamatotalpieceofshit,” viewers dug into the complicated process behind vetting guests for an Airbnb. Several self-proclaimed hosts chimed in, claiming that any limitations placed by an owner can make their property get lost in the Airbnb algorithm, which encourages property owners to keep their prices low and allow pretty much anyone to rent.

This, unfortunately, leads to occasional renters like the group seen in the video. Airbnb has apparently attempted to curb this behavior through various rules, like cracking down on known “party” locations and disallowing one-night rentals during key party dates, like New Years and Halloween, according to commenters. The company also reportedly allows hosts and guests to rate one another.