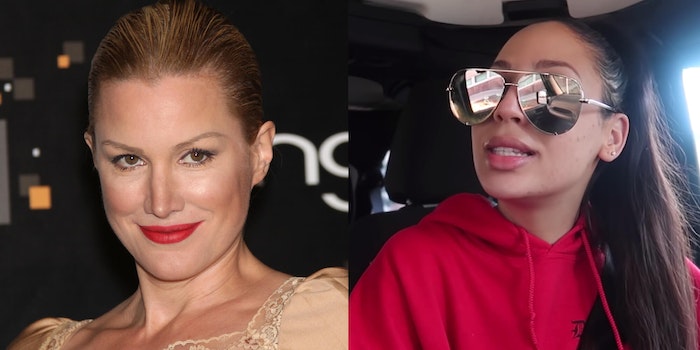 Alice Evans goes off on YouTuber over parking blunder

'That's horrible. That's a horrible thing to do.'

An altercation between Alice Evans and a YouTuber went viral Wednesday after a minor parking snafu set Evans off.

The Vampire Diaries actress lost her temper with beauty vlogger Kayla Lashae on Monday afternoon. Lashae filmed the majority of the incident, which began after Evans, while pulling out of a parking space in her Prius, knocked into Lashae’s bumper. The video of the argument that followed has been making the rounds online.

The confrontation began, it appears, after Evans pulled out of a tight parking spot. The first moments of the video, shared by TMZ, show Lashae—phone focused on the ground—stepping up to check her left front fender. The video then cuts forward several moments, to Lashae stepping out of her car to engage Evans. The British actress, clearly irate, immediately launches into an accusation. “What the fuck are you parking here for,” the 48-year-old actress exclaims. “We’re all trying to find a place, and you’re like ‘my car, my car, my car.’ I’m trying to get in there with a child who’s sick. That’s horrible. That’s a horrible thing to do.”

As the video proceeds, Evans gets noticeably more upset. “This is a massive gas-guzzling car,” Evans says, gesturing to Lashae’s Jeep Wrangler. “And you’re in a compact space. That’s not right. You’re over onto the edge of my car.”

At this point in the video, Lashae pipes up, noting that Evans was the one who struck her vehicle. “You ran into my car, and you hit that person’s car,” she says, pointing to a parked white car behind Evans. “Do you see your black marks?”

Evans responds to the accusation by saying the event would not have occurred had Lashae not shouted at her.

“I yelled at you because you were running into my car,” Lashae responds in the video.

“You yelled at me because you are a big old posh gas-guzzling car snooty woman, and me and my bashed-up Prius, and you’re like ‘oh no oh no,'” Evans replies. “It’s not bashed,” she continues, indicating Lashae’s car. Both women have their phones out by this point in the exchange, and Evans makes sure to get footage of Lashae’s “not bashed” car and plates. “It says compact, compact,” she says. “This is your registration plate… thank you, I have everything.”

The exchange ended there, with Evans reentering her vehicle and driving away. Lashae told TMZ about the other vehicle Evans hit on her way out—the parked white car—before she drove away without leaving a note. In response, Lashae filed a police report with the Los Angeles Police Department, per TMZ.