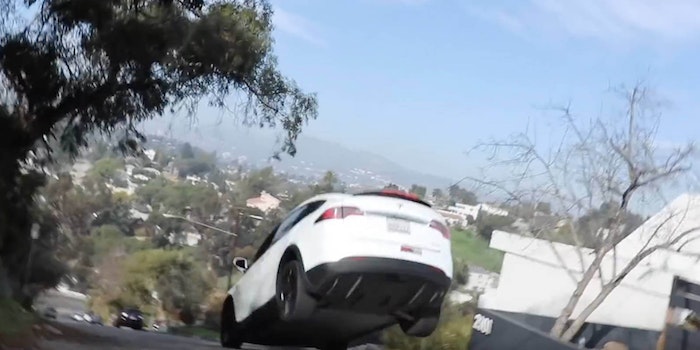 YouTuber David Dobrik has (perhaps) gained a new fan in Tesla founder and CEO of SpaceX Elon Musk. Wildly known for his wild, celebrity-dense, 4-minute-and-20-second vlogs, Dobrik has grown beyond web-famous. And in his most recent vlog, the 23-year-old tried a ridiculous “flying Tesla challenge.”

Dobrik, however, did not perform the stunt himself; he offered up his own beloved Tesla Model X to the two Instagrammers. The pair sent the vehicle airborne via the natural cresting of a nearby hilly road. The stunt made the video go viral and quickly amassed over 8 million views recently.

The YouTube star posted the video on Twitter, and Musk himself responded with only a single exclamation point. Dobrik, with usual wit, replied: “Does this mean my warranty is canceled?”

Musk’s response may perhaps be in connection to his long-standing conviction that a flying or hovering car—perhaps a hyper-futuristic next-gen version of his upcoming Tesla Roadster—is possible, suggesting it as far back in 2017 and again in 2018.

Then, again last year, appearing to be serious about the endeavor.

The new Roadster will actually do something like this https://t.co/fIsTAYa4x8

I’m not. Will use SpaceX cold gas thruster system with ultra high pressure air in a composite over-wrapped pressure vessel in place of the 2 rear seats.

It’s a nice thought, and there are some significant challenges, but for now, we’ll have to settle for people jumping Model S cars over hills.