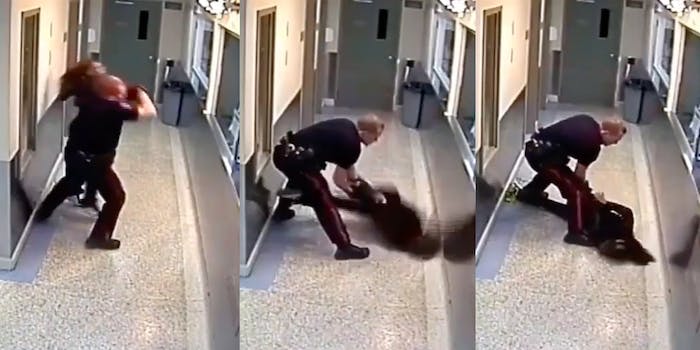 The graphic video shows blood leaking from Dalia Kafi's face as she lays there.

A video of a Canadian police officer throwing a woman face first to the ground, resulting in serious injuries, was just released to the public.

The incident took place in December of 2017, and constable Alex Dunn was charged with assault causing bodily harm. The video was released as Dunn’s trial started.

Dalia Kafi was arrested back in 2017 for breaking a court-ordered curfew. In the video, she’s waiting to get her booking photo taken. Dunn begins to try and take Kafi’s headscarf off, but she doesn’t let him. Kafi attempts to move away from him until he throws her body to the ground.

Her head can be seen hitting the wall, and her face slams into the ground. The graphic video shows blood leaking from Kafi’s face onto the floor as she lays there. That’s when another officer comes over.

After the incident, the Calgary Police Service suspended Dunn for a year without pay but eventually brought him back to take on an administrative role. During his trial, the man who witnessed what happened, Staff Sgt. Gordon Macdonald, did not hold back in condemning Dunn’s actions. He said that it was “the worst use of force” he had ever seen.

“There’s only one type of sound when somebody’s bone hits the floor and that’s what I heard,” Macdonald said when he testified. When the judge asked if Dunn’s reaction was justified, Macdonald sternly said, “No.”

Kafi was later taken to hospital to be treated—she received stitches in her lip and surgery for a broken nose.

CPS released a statement saying that the verdict will determine if any additional actions will be taken against Dunn. It also told TMZ, “Police officers are trained to de-escalate conflict and to use the least amount of force necessary to safely resolve a situation. We expect them to follow the law, our policies and our training.”