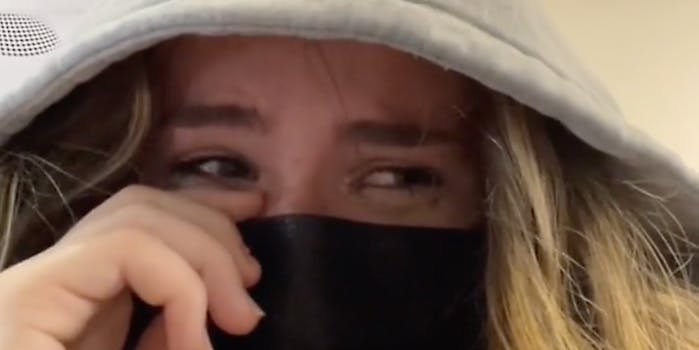 Many feel the apology letter the company sent her wasn't really an apology.

TikToker Sierra, or @sierrasteadman, posted a tearful video to her account after an Alaska Airlines stewardess allegedly slut shamed her and threatened to have her thrown off the plane over her outfit.

Captioning the post with “I’ve never felt more degraded, ashamed, embarrassed, angry or sad” Sierra went on to add via comments that the stewardess grabbed her arm when she tried to walk away from her and that she was “screaming in [her] face.”

Something which many commenters were quick to point out constitutes assault, with advice to sue over it not far behind.

Sierra went on to post another TikTok showing the outfit she was wearing at the time. Consisting of loose shorts, a cropped top and a baggy zip up jacket, the outfit conformed to both the law and Alaska Airlines’ own dress code which states “the requirement is simply a neat and well-groomed appearance” and only bars “Clothing that is soiled or tattered and bare feet.”

She also placed a followup comment on this TikTok, stating “outfit aside, there was no reason to physically & verbally assault me & humiliate me, especially when I complied w her request”.

After Sierra’s mother wrote to Alaska Airlines with a complaint about the incident, the company responded, and Sierra shared that response in a third video. In it, the company apologized that the two of them “did not feel” that they had been treated with “the utmost respect, compassion and care.” They also promised that an internal investigation would be carried out but that, due to “privacy concerns,” they would not be able to share the results with the two women.

For many of her followers, this wasn’t enough, with some comparing it to the standard non-apology of “I’m sorry you were offended.”

Since Sierra posted her first TikTok about the incident, TikTokers have been commenting on Alaska Airlines’ official TikTok account, demanding that they address the situation as well as stating that they will never fly with them as a result.

Update 9:14am CT, Aug. 5: When reached for comment, Alaska Airlines told the Daily Dot in a statement that “It’s our goal to provide caring service to all of our guests. When we don’t live up to that goal, we do we everything we can to make it right. We are in contact with Sierra and her family and are committed to finding out what happened and taking all appropriate action.”

The Daily Dot has reached out to @sierrasteadman.