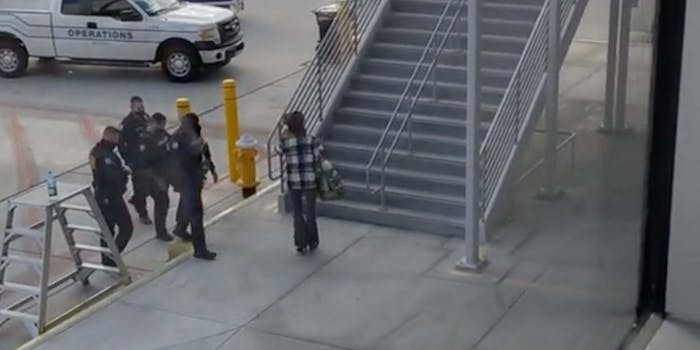 ‘Why do people think they are so damn important?’: Viral TikTok shows Karen running onto airport tarmac to catch her flight

'Did she [think] the plane was going to back up for her?'

In a TikTok posted on Dec. 27, a woman is seen being escorted off a tarmac in Phoenix’s Sky Harbor airport.

The video has received over 530,000 views. In the video’s comment section, @anthonyk892 wrote that she missed her flight because “she got wasted at the bar behind the gate.”

“She was literally arguing with the guy helping elderly get ready for the next flight,” the TikToker continued in the comment section. “She said ‘I’m special needs.'”

Newsweek reported that the woman, who the outlet reported was identified as Vickie Meyers, was arrested for trespassing. Criminal trespassing can be a Class 1, Class 2, or Class 3 misdemeanor or a Class 6 felony in Arizona.

In a follow-up video, the woman is seen talking to police officers while they hold her hands behind her back. @anthonyk892 also posted the same video with its original sound, and viewers can hear a round of applause while the woman is escorted away from the gate.

“Karen thought she could talk her way out of a felony,” wrote @anthonyk892 in the follow-up video’s overlay text.

“People keep playing at the airport like it’s not federal,” wrote @itsyagalb.

“Did she [think] the plane was going to back up for her?” commented @goldendars3000. “What’s going on inside that hat.”

The Daily Dot has reached out to the Phoenix Police Department and @anthonyk892.