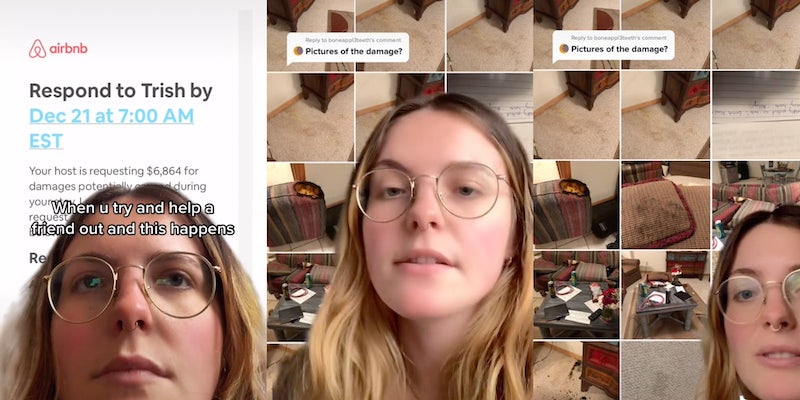 ‘Your host is requesting $6,864 in damages’: TikToker gets ‘insane’ Airbnb bill after her ‘friend’ uses her name to book

'This is why I don't help anyone.'

A viral TikToker says she was charged what viewers are describing as an “insane” fee for damages after booking an Airbnb for her friend. After this, her friend might not be her friend anymore.

User @egooorls69 shared a screenshot of the extra bill, which totaled a whopping $6,864, “for damages potentially caused during your stay.”

The TikTok garnered about 1.4 million views and nearly 50,000 likes as of Friday. Viewers were just as shocked as the TikTok creator.

“This is why I don’t help anyone,” one viewer commented on the video.

“This is why I will never do it again lol,” the creator responded to the comment.

One viewer said the TikTok creator should make her so-called friend pay the damages: “Girl if you don’t make them pay for it.”

But according to the creator, the friend might be in jail now.

Several viewers questioned what the friend could have possibly done to rack up nearly $7,000 in damage fees, so the creator shared a series of pictures sent to her by the Airbnb owner.

Apparently the friend staying in the Airbnb threw one of the couch cushions into the fire, leaving a large, burnt hole in the corner of it. They also got ash everywhere and let their dog do its business anywhere. On top of that, they signed the TikTok creator’s name on the guest list.

On the small bright side, the Airbnb owner was “very kind” about the whole thing, the TikToker said.

“She kinda understood that I rented it for someone else, and I hadn’t done it,” she said. “But still super shitty situation.”

Based on the pictures the TikToker shared, viewers didn’t understand how the damages could realistically total $6,864.

“That’s not 7k worth damage, maybe 1k,” one viewer commented.

But a few viewers pointed out that even if the actual damage wouldn’t cost that much to replace, the Airbnb owner still had to make up for the lost revenue while they fix or replace the damaged items.

“Damage fees may be higher bc she’s going to lose bookings while it has to be fixed,” one person wrote.

Regardless, other TikTok viewers insisted that the damage fees were still too high, adding that that’s why landlords get insurance.

“Girl, this is why the host has an insurance policy. I work in insurance and we write for Airbnb rentals all the time. Fight this,” one commented.

Neither TikTok user @egooorls69 nor Airbnb responded to the Daily Dot’s request for comment.