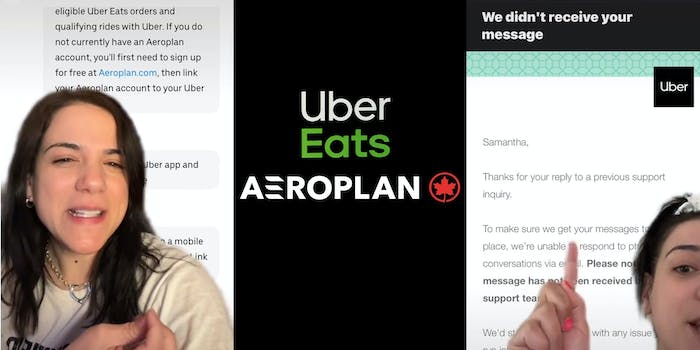 'This happened to me too.'

A woman’s boyfriend reportedly signed up for a credit card due to an Uber Eats promotion that seemingly never applied, and she’s taken to TikTok to share her concerns.

The video, posted by Sam Doll (@sam_d0ll) on April 2, opens with her saying, “Uber Eats support messed with the wrong bitches boyfriend.”

She begins with an explanation of the issue, “Uber Eats has this promotion where if you sign up for an Aeroplan credit card, you get Eats Pass for 6 months. Eats Pass is a pass where you get free delivery and other perks. So Joe, who loves a deal because he’s frugal, goes on his Uber app to apply the pass, and they charge him for it.”

“He’s a reasonable man. He’s like, no problem, I’ll just go to Uber support, surely they’ll handle this for me. How wrong he was.”

She continues, showing a screenshot of his conversation with Uber support, where he was told not how to purchase the Eats pass as opposed to helping with his inability to access the one allegedly attached to his credit card. He explained again that he had the card, but the card was not working alongside his Eats pass. Uber then suggested that he reach out to Air Canada’s customer service to resolve the issue.

It does appear that there is a promotion where Aeroplan cardholders do receive an Uber Pass with their credit card, albeit not an Uber Eats pass.

Sam’s boyfriend Joe continued to exchange messages with Uber support where Joe found little to no help, receiving the same message three times despite letting support agents know he had already attempted the solutions they presented.

Sam then claims that Uber admitted “it was wrong on their end and that they’re working on it, but then stopped answering his help requests… they’re fucking garbage support.”

She then followed up the original video on April 19, claiming that “the problem persists”. Despite Uber reaching out to Sam, the issue was never resolved.

She says, “I’m not a conspiracy theorist but something fucking insane is going on with Uber Eats.”

She rehashes her earlier video and then showcases a screenshot of an email from Uber Support concerning said TikTok. The support agent asked for Joe’s email, which Sam provided. Joe told them the issues he was experiencing with the Eats Pass and was told they’d get back to him.

Sam then claimed the support ticket was closed with no notice.

She eventually called Uber support, twice, only to be disconnected the first time and told that she can’t access her boyfriend’s account the second time, but that they’ll send a satisfaction survey. Sam and Joe replied to the survey email but were reportedly told that they can’t continue phone support online, leaving them with no means of rectifying the situation.

Eventually, a support agent reportedly reached out and told Sam that she can’t provide details to her due to the privacy policy, but that she was working on it.

In a follow-up comment posted on April 21, Sam claims Uber sent Joe $150 in Uber credit but never applied the free 6 months of Eats pass promotion. Some commenters felt it was too little, too late.

One user said, “Uber Eats always emails saying they have promotions and the promotions never exist or work!”