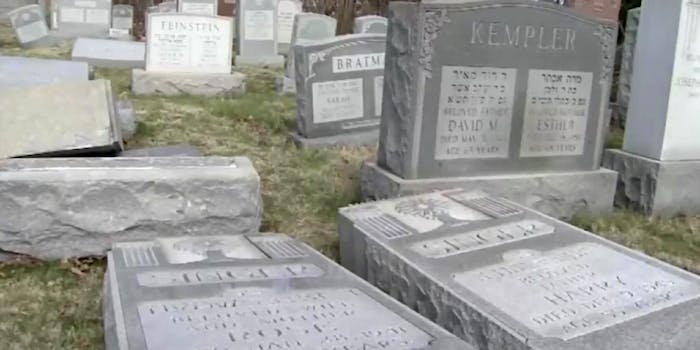 The Anti-Defamation League saw its second-highest number of anti-Semitic incidents in almost 40 years.

The United States saw near-record levels of anti-Semitic harassment, threats, and vandalism in 2017, according to a new report released by anti-Semitism watchdog group the Anti-Defamation League on Tuesday.

According to the league’s report, published by the Los Angeles Times, anti-Semitism surged by 57 percent from 2016. The league counted 1,986 anti-Semitic incidents last year, the second-highest number of incidents since the group’s tracking efforts began nearly 40 years ago. The highest number ever recorded was 2,066 incidents in 1994, the year that the peace treaty between Israel and Jordan was signed.

The 57 percent jump, however, is the largest year-over-year increase the group has ever recorded, with more bomb threats against Jewish centers (163) and schools, and vandalism at synagogues and Jewish cemeteries (952). Physical attacks are the only category that declined in 2017, falling 47 percent, and accounted for fewer than one percent of all incidents.

While the report also predicted a continued increase in verbal and visual anti-Semitism on social media, the league reported that such data could not be quantified.

Comparatively, the FBI also saw an increase in hate crimes reported between 2015 and 2016 for the second year in a row. The data, shared in November, showed a 4.6 percent increase with 6,121, more than half deemed to be racially motivated incidents. The Southern Poverty Law Center too has seen an increase in neo-Nazi groups from 99 to 121 in the last year.

Jonathan Greenblatt, chief executive of the league, cited the resurgence of white supremacy, such as the deadly demonstration in Charlottesville, Virginia, in August, as well as President Donald Trump‘s lethargy in dismissing the onslaught of anti-Semitic attacks early last year and propensity to retweet supremacists himself. Trump has previously denied being anti-Semitic.

“Hate groups and white supremacists feel emboldened, and they are not just coming out online but are also getting involved in political campaigns,” Greenblatt told the Times.