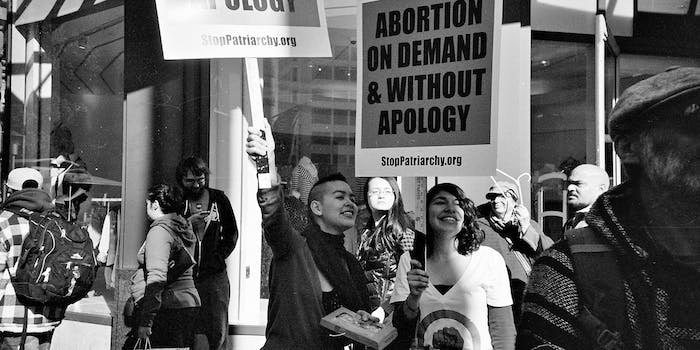 Nearly half of all abortions worldwide are unsafe, report finds

From 2010-2014, nearly half of the abortions worldwide, or 25 million abortions per year, were performed under unsafe conditions, according to a new study by the World Health Organization (WHO) and the Guttmacher Institute, a reproductive health research group.

The study, published in medical journal the Lancet, found that 55 percent of all abortions performed annually were “safe,” meaning they were performed by a trained health worker using WHO-recommended methods appropriate for the pregnancy’s duration.

According to WHO, incomplete abortion, hemorrhaging, injury, and infection can result from “least safe” abortion procedures.

The majority of both less safe and least safe abortions (97 percent) occurred in developing countries in Africa, Asia, and Latin America, which researchers connected to laws, societal attitudes, and abortion availability. In the 62 countries where abortion was banned or performed in the exception of the pregnancy posing a risk to the mother’s life, only 25 percent of abortions were safe. A third of the abortions in these countries were considered “least safe.”

However, in the 57 countries where abortion is available on request, 90 percent of abortions were safe. The study also found that the subregions with the highest rates of safe abortions (northern Europe and northern America) also had the lowest abortion rates, which researchers connected to better health infrastructure, less-restrictive abortion laws, and high rates of contraceptive use, economic development, and gender equality. Despite popular belief, banning legal abortion procedures does not stop women from seeking abortion.

“Like many other common medical procedures, abortion is very safe when done in accordance with recommended medical guidelines and that is important to bear in mind,” Dr. Gilda Sedgh, co-author of the study and principal research scientist of the Guttmacher Institute, said in a statement with WHO. “In the high-income countries of North America and Western and Northern Europe, where abortion is broadly legal and health systems are strong, the incidence of unsafe abortions is the lowest globally.”

You can find the entire study here.