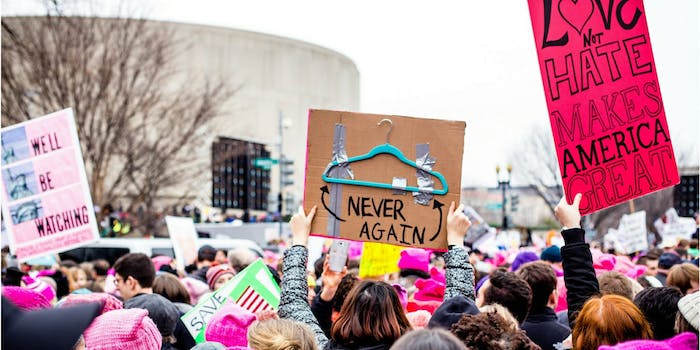 Senate to vote on bill banning abortion after 20 weeks

The bill hinges upon the unproven claim that fetuses can feel pain at 20 weeks.

The Senate is expected to start a procedural vote on Monday for a bill that would effectively ban and criminalize abortion on pregnancies more than 20 weeks along.

According to the Hill, Senate Majority Leader Mitch McConnell moved to bring up  S. 2311, the “Pain-Capable Unborn Child Protection Act,” on Monday. The bill, sponsored by Republican South Carolina Sen. Lindsey Graham, criminalizes any attempted or performed abortion after 20 weeks. The law’s violators would face up to five years in prison, a financial penalty, or both.

The bill allows two exceptions in the case of rape, or rape or incest against a minor. However, the former exception requires that a woman receive medical treatment or counseling at least 48 hours before an abortion, or that she have reported the rape to law enforcement. The latter exception also requires that the rape or incest be reported to social services or law enforcement.

McConnell’s pivot comes after President Donald Trump called upon the Senate to pass the law, and “send it to my desk for signing,” during his address at the March for Life, the largest annual anti-abortion march in the nation.

The Senate bill is a counterpart to the House’s bill HR6 of the same name, sponsored by then-Arizona Republican Rep. Trent Franks, who resigned last year after asking female staffers to be surrogates for him and his wife.

Both bills, invoking the idea that “unborn children” are “pain-capable,” rely on the scientifically false understanding that a fetus can feel pain after 20 weeks of pregnancy. However, the claim has never been proven, and the stance of the American College of Obstetrics and Gynecology is that 20 weeks is too early for a fetus to feel pain. According to a 2005 study from the University of California, San Francisco, fetuses were found to not be able to perceive pain until 26 weeks, into the third trimester.

Furthermore, the vote on the bill comes amid a weeks-long struggle to negotiate and pass immigration reform to give an estimated 800,000 DACA recipients a path to citizenship. DACA allows young, undocumented immigrants brought to the United States as children to legally to work in the country.

“This bill is unconstitutional and shameful on its own—the decision to have an abortion is one that should be made by women, not politicians,” Faiz Shakir, national political director at the American Civil Liberties Union, said in a statement. “It’s even more outrageous that the Senate would take up this vote when they should be spending their time finding a solution for the 800,000 Dreamers who have spent months living in fear and anxiety.”