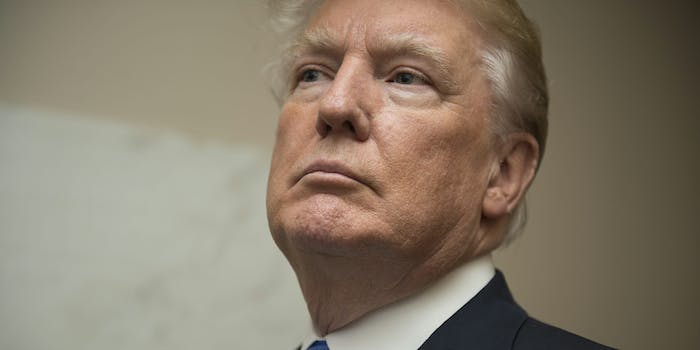 The proposed framework has been called a 'white supremacist ransom note.'

The framework, sent to reporters on Thursday, proposes to give DACA recipients and those who are eligible for DACA a 10-12-year path to citizenship, which would potentially legalize 1.8 million people. Legal status, then, would be determined by a set of clarified eligibility requirements to “mitigate fraud” and would be “subject to revocation for criminal conduct or public safety and national security concerns, public charge, fraud, etc.”

While the proposed framework would still allow for some family sponsorships, it suggests curbing sponsorships to only immediate family—spouses and minor children—and would “apply these changes prospectively, not retroactively, by processing the ‘backlog'” of sponsored immigrants. It would also end the diversity visa lottery program, and repurpose the 50,00 annual visas for families and high-skilled immigration green cards.

Much of the “compromise,” however, is dedicated to border security, with the White House asking for $25 billion for the border wall. Additional funds would be used to hire Homeland Security personnel and Immigration and Customs Enforcement lawyers and law enforcement; fund recruitment programs; close “legal loopholes” for immigration; end the immigration of criminals and “illegal border-crossers;” and stop people from trafficking drugs, committing immigration fraud, and staying past their visa’s expiration.

While House Speaker Paul Ryan commended President Donald Trump for his “leadership” and Sen. Tom Cotton (R-Ark.) called the framework “generous and humane,” critics have bashed the proposal for using Dreamers as a bargaining chip for legislation that further hurts the population it would potentially legalize by proposing to end family reunifications.

“Let’s call this proposal for what it is: a white supremacist ransom note,” United We Dream Advocacy Director Greisa Martínez Rosas told NBC News in a statement. “Trump and Stephen Miller killed DACA and created the crisis that immigrant youths are facing. They have taken immigrant youth hostage, pitting us against our own parents, Black immigrants and our communities in exchange for our dignity.”