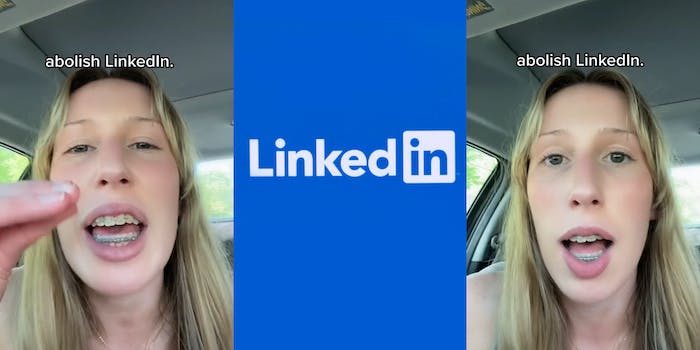 “Your home feed will be like ‘Congratulations to (your worst enemy) for getting promoted!!!'”: Woman’s video on why we should ‘abolish LinkedIn’ goes viral

'All that app has done is disconnect me from happiness.'

A woman on TikTok says a different social media platform should be abolished: LinkedIn.

The TikToker, Molly (@princess_milkyy), says in a video she has a “serious problem” with LinkedIn. The platform, which was launched in 2003, is a business and employment-oriented online service mainly used for professional networking and career development.

“I don’t know whose bright idea that app was, but I think it sucks,” the TikToker says. “You sign up for LinkedIn, and you will never have a moment’s peace ever the fuck again.”

For the record, LinkedIn was reportedly Reid Hoffman’s bright idea. He co-founded the app in his living room in 2002, according to the company’s website.

Molly says she gets notifications from LinkedIn every day asking if she knows “so and so.” She is likely referring to how the app sends users suggestions of who to connect with on the network.

“And then they just go ahead, and they show me the biggest dipshit I have ever met in my entire life,” Molly says in the video.

The TikToker adds that LinkedIn is “so successful” and making so much money. The company’s annual revenue from 2017 to 2020 was $8.05 billion, according to Statista.

“I’m trying not to kill myself over here,” Molly says in the video. Then, seemingly addressing LinkedIn, she adds, “Why are you showing me this? What the fuck are you gaining from this? I don’t want to connect with this asshole. I don’t want to network, I could barely fucking recognize him in the photo wearing dry clothes [and] not making any profane hand gestures. And now you’re telling me he’s the youngest chief of surgery in history? Fuck out of my face.”

Viewers seemed to agree with the TikToker, who has over 200,000 followers on the platform.

“I hear NOTHING but straight facts. Major W as usual,” one viewer commented.

“No fr and why do people use it so much,” a second viewer commented, to which Molly joked, “like they need to go link with some btchz IMMEDIATELY.”

A third viewer said, “I’ve been 6 months clean from LinkedIn and I couldn’t be happier.”

“Your home feed will be like ‘Congratulations to (your worst enemy) for getting promoted!!!’ ENOUGH,” one commenter said.

Others viewers shared their own pet peeves with the app.

Another commenter complained, “‘You showed up in X searches this week!” OKAY?????”

“My toxic trait is wanting to share this on linkedin captioning it ‘the career advice i needed to hear,'” one user commented.

The Daily Dot reached out to @princess_milkyy via TikTok comment.