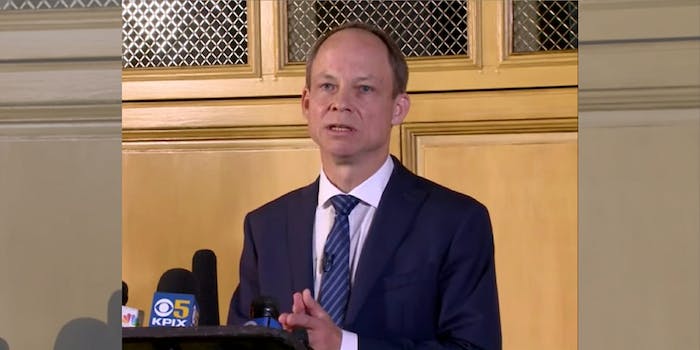 Aaron Persky, the judge who sentenced convicted rapist Brock Turner to six months in prison, has compared the unpopularity of his decision to that of Brown v. Board of Education, a historic case that desegrated American public schools.

Speaking during a press conference in Palo Alto, California, his first public statements in a year, Persky discussed the recall vote he faces in June over the light sentence he gave Turner. He defended his sentence and said that removing him as a judge would negatively affect the justice system. He then went on to compare his decision to the Supreme Court decision that found racial discrimination unconstitutional.

“Brown v. Board of Education was unpopular in many states. Imagine for a moment if those federal judges had been faced with judicial recall in the face of that unpopularity,” Persky said.

Persky received harsh criticism in 2016 when he sentenced Turner to six months in prison and three years probation for three counts of felony sexual assault, for which Turner faced a maximum of 14 years. Turner served only three months of his sentence before being released.

According to BuzzFeed News, Stanford Law School Professor Michele Dauber is leading the recall effort against Persky, stating the judge has exhibited “a long pattern of bias in favor of privileged men.”

“Persky has repeatedly abused his discretion on behalf of abusers. As a result, voters in this county have lost confidence in his ability to be fair,” Dauber told the publication. “In Brown, the Supreme Court bravely ruled with the powerless against the powerful. In Brock Turner’s case, Persky did the exact opposite.”

In August following Turner’s sentencing, Persky was reassigned from criminal cases. In December, Turner’s lawyers filed for an appeal of the case, and called the trial “fundamentally unfair.”

For sexual assault survivors, advocates, and attorneys, Persky’s decision will serve as a poignant moment in rape culture—in that, the light sentence finally brought attention to how rapists often go lightly punished, if at all—but it was far from the celebratory result of Brown v. Board of Education.