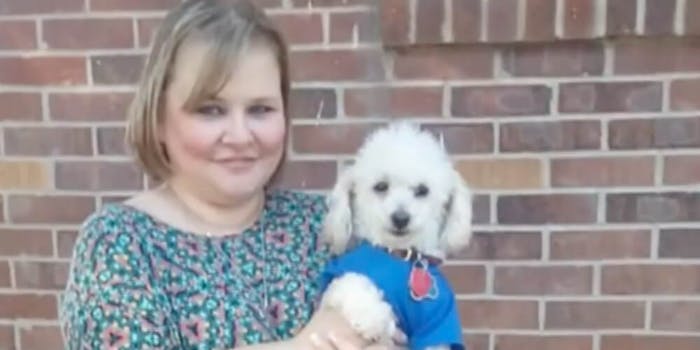 'I don't know why you're freaking out.'

An Arkansas woman was trapped in her SUV as floodwaters rose around her when she dialed 911 for help. What followed was a 22-minute exchange with a dispatcher who did little to comfort her in what would be her final moments.

According to CNN, Debra Stevens. 47, was out delivering the Southwest Times Record newspaper on a route she frequently drives when she encountered massive floodwaters, and her vehicle got stuck. At around 4:38am on Aug. 24, Stevens made the emergency call. During the call, which police released this week, Stevens told the dispatcher that she could not swim and that the water was rising very quickly. She also cried and pleaded for help, even asking the dispatcher to pray with her at one point. All throughout the call, the dispatcher sounded unconcerned and even mocked the panicked woman.

“I have an emergency–a severe emergency,” Stevens told the female dispatcher, Donna Reneau. “I can’t get out, and I’m scared to death, ma’am. Can you please help me?”

“You’re not going to die,” the dispatcher responded. “I don’t know why you’re freaking out … You freaking out is doing nothing but losing your oxygen in there. So, calm down.”

When Stevens told the dispatcher that the rising waters were about to ruin her phone–as she was afraid it would end the call and no one would be able to find her–the woman on the line seemed to be completely unconcerned.

“You’re over there crying for your life. Who cares about your phone?” the dispatcher asked.

Eventually, Stevens asked the dispatcher to pray with her.

“You go ahead and start off the prayer and I’ll listen to you,” she responded.

Stevens said a prayer, begging for intervention. She also explained to the dispatcher that she was afraid her vehicle would be swept up by the floodwater.

“You have nowhere to be swept away to besides the street that you are on, so just calm down,” the operator responded.

Stevens began to panic as more and more water filled her SUV, and the operator ordered her to “shut up.” In the final moments of the call, Stevens screamed and pleaded for help. The call got disconnected at 5am. And 58 minutes later, Stevens’ body was located.

The Fort Smith Police Department released video and audio related to the incident, along with a press release after receiving “numerous requests from members of the media.”

“While the operator’s response to this extremely tense and dynamic event sounds calloused and uncaring at times, sincere efforts were being made to locate and save Mrs. Stevens,” the statement reads.

Police spokesman Aric Mitchell told KHBS news that the 911 operator “appeared to have acted within department guidelines.”
“She did nothing criminally wrong,” Mitchell said. “I’m not even going to go so far as to she violated policy.”
Mitchell also explained that the dispatcher had already submitted her resignation on Aug. 9, and Stevens’ call was her very last one on the job.
READ MORE: