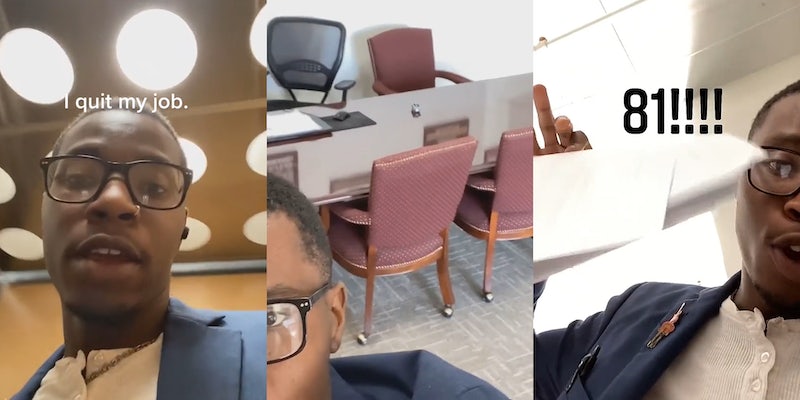 ‘Oh they set you up’: Worker quits after boss gave him 81 evictions to hand out with no training

'They hired you as the fall guy sir.'

A man created a video right after he quit because he was allegedly asked to hand out 81 eviction notices without any training.

In a video with over 602,000 views, user Dev (@onlydev414) says he’s only been working at his job for a week. During this period, he claims he has been given no training. At the same time, Dev observes that the last people who were working with the company got fired, and many positions have been open for a long time.

To cap off the experience, Dev claims that in his manager’s brief time in the office, they gave him 81 five-day eviction notices to hand out. While Dev concedes that many owe a considerable amount of rent, he says that he does not have the knowledge or experience to answer all of the follow-up questions that come with handing out an eviction.

In one of the calls recorded by Dev, a tenant seems to allege they actually paid rent and had the checks to prove it. Dev is unable to offer a response.

As a result of all of these issues, Dev claims he quit the job.

Viewers of Dev’s video agreed that the situation seemed abnormal, and many speculated that Dev was hired as a “fall guy” and that it was a “setup.”

“81 evictions don’t even make sense. nah that manager can do it herself,” one argued.

Others said that, regardless of the specific situation, the lack of employees was a major red flag.

“It will tell u a lot about the company when NOBODY has worked there in months. Like…HOW,” a user shared.

“I’m glad you left bro… It sounds like a straight set up! You leaving was the best protection for yourself,” a second agreed.

Other workers on TikTok similarly documented how they did not receive any training prior to their oftentimes high-stakes jobs. A worker who makes industrial heaters and fans said he did not receive any training after being on the job for two days. He expressed concern that he was going to mess up customers’ orders and was reportedly later fired. An ex-Crumbl Cookies worker spoke out against the company in another video, allegedly revealing she, too, did not get any training.

According to the Houston Chronicle, workplaces that don’t offer any training have unhappy employees and high turnover rates. The outlet further reports that a lack of training can lead to a low rate of production due to “errors and work needing to be repeated or corrected.” Furthermore, the Occupational Safety and Health Administration, per the Chron, found that no training fosters an unsafe work environment and has the potential to have deadly consequences.

The Daily Dot reached out to Dev via Instagram direct message.