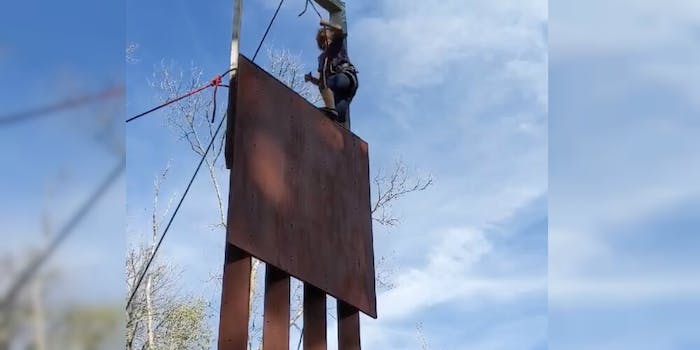 She scaled the structure in minutes.

Expert climbers from around the world have been invited to speed climb a replica of President Donald Trump’s “impenetrable” border wall—and an 8-year-old says it’s easy, the Root reports.

On Sept. 19, Trump held a press conference at a section of the border wall. In his remarks, he described the tests that went into the design. “We have, I guess you could say, world-class mountain climbers. We got climbers. We had 20 mountain climbers,” Trump said, according to the White House transcript. “And we gave them different prototypes of walls, and this was the one that was hardest to climb.”

Trump said the structure is “impenetrable” and “can’t be climbed.” But according to 75-year-old Rick Weber, a retired engineer and active rock climber, these claims were fishy at best.

“No one in our climbing community knows any of these 20 mountaineers. I doubt if they exist,” Weber wrote in an article for the climbing and mountaineering outlet Rock and Ice magazine. “More importantly, to declare something to be impossible to climb to a bonafide rock climber is to issue a challenge.”

Weber met that challenge by building a to-size replica of Trump’s wall in four days with the help of a few friends. He put out his challenge in Rock and Ice, inviting climbers to his Kentucky land on Oct. 11 and 12 to participate in speed climbing competitions to prove Trump’s claims false.

But before any of the professionals could line up to compete, an 8-year-old showed just how easy it really can be.

Some family friends helped Weber set up over the weekend. Their daughter, Lucy Hancock, was one of the volunteers to help test the safety system. During the test, Lucy scaled the wall in just a few minutes. Her mom shared a video of the climb on Sunday and said Lucy declared the border wall’s difficulty “an easy 5.7.”

Remember that border wall replica built by Rick Weber for a competition next weekend in the Red River Gorge? We were…