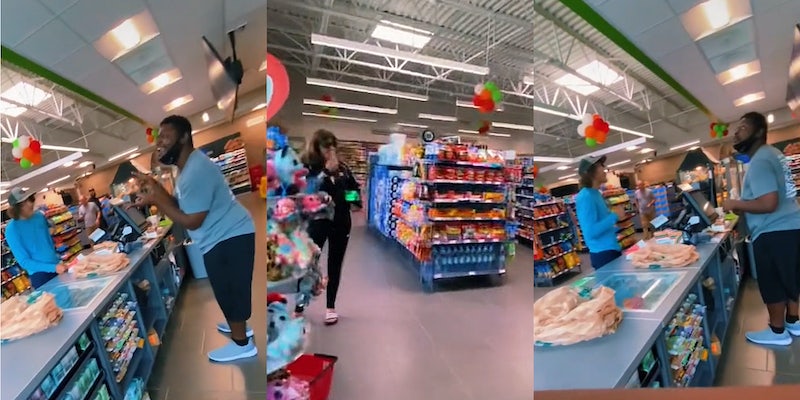 ‘Get the f*ck out of here’: 7-Eleven worker loses it on ‘Karen’ who was allegedly upset her soda was $3 instead of $2

'That man needs a bonus.'

A 7-Eleven employee seemed to reached his limit with a difficult customer in a video uploaded to TikTok on July 28. His colorful reaction to one “Karen” has gone viral with over 70,000 views on the platform.

In the original video, posted by @thatsyesi, the cashier tells off a “Karen,” who allegedly threw a tantrum over her soda being $3 instead of $2.

“My brother sent me this video of a Karen while he was working,” the creator added in the caption. “The lady got mad over her soda being $3 instead of $2.”

The man in the video had enough of her alleged antics and began telling her off, at one point calling her a “scallywag.”

“Get the fuck out of here with your raggedy ass,” the employee tells the woman. “Bitch, I’m trying to help your stupid ass and you want to come up here with that bullshit.”

The customer and employee berate each other until she finally leaves the Florida store. She did receive her money back, according to the caption.

@thatsyesi My brother sent me this video of a karen while he was working 😂😂which yo raggedy ass 😂karens stay tripping. The lady got mad over her soda being $3 instead of $2 and yes she got her money back #karensbelike #karentiktok #viral #711 #plutotvdecades #plutotvisfree #viraltiktok #karen #annoyinhcustomers #viral #virallllllllllllll #fypppppp #fypシ゚viral ♬ original sound – Yesi

TikTok viewers were thrilled to see an employee standing up to difficult customers.

“That man needs a bonus! A raise! A promotion and a 4 week paid vacation!!!,” wrote one viewer.

“Finally I see someone telling off a customer yessssssss,” commented another.

“I can never work retail again. I feel this in my soul,” another wrote.

Many were shocked by his whiplash-like tone change when it was time to help the next customer. In a matter of seconds, he snapped back to a professional demeanor.

“I hope he doesn’t get in trouble for this. his switch to professionalism is impeccable. he still helped the next customer,” one viewer said.

According to a comment left by the TikToker, the man did not get fired.

The Daily Dot reached out to @thatsyesi via TikTok comment for this story.