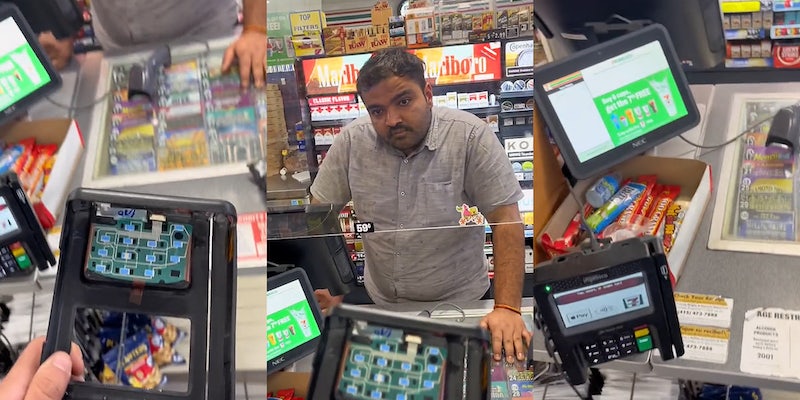 ‘I woulda walked out with a drink and chips in hand lmao’: Shopper finds credit card skimmer at 7-Eleven

'The look on his face says that it's his.'

7-Eleven has made headlines in recent months after shoppers found credit card skimmers attached to their card readers. A “card skimmer” is a device that captures card information, which allows the card to be copied or used elsewhere without the owner’s consent.

Now, another 7-Eleven card skimming story has gone viral. In a video with over 39 million views, TikTok user Will (@willhunter908) says he discovered a card skimmer at a 7-Eleven location in Mill Valley, California.

“Just did it again,” he says in the video. “That’s fucking crazy.”

After Will and his friend remark upon the insanity of the situation, Will begins to walk out with the device.

“You can’t do that,” the attendant responds.

This comment and the attendant’s demeanor have led some commenters to suspect that he had something to do with it.

“The look on his face says that it’s his,” wrote one user.

“The fact the guy said you can’t do that when you said your gonna take it, shows it’s his,” added another. “Call the cops.”

In another video, Will claims he found another skimmer at 7-Eleven, this time in San Rafael, California.

In a further follow-up, Will advises users on how to spot a credit card skimmer.

For this specific unit, he recommends looking at the sides to see if there is a faceplate. Other users in the comments suggested that one can simply tug on the face of the machine; if it comes off, it’s likely a skimmer.

Additional users advised using one’s phone to search for Bluetooth devices next to the skimmer, as many skimmers operate via Bluetooth (the skimmer will show up under a variety of names, they claim, but generally just a series of numbers).

Furthermore, many users state that paying by tapping the card makes it less likely for a skimmer to steal one’s information.

“The stripe transmits your info, chip and tap use single-use codes which change each time, making it virtually impossible to skim w them, a commenter shared.

“Basically use Apple Pay. It hides your real cc number and makes a temp number for that one transaction,” added a second.

Apple’s website explains that it does not provide machines with actual numbers. Rather, it uses “dynamic security codes” that function in the same way but do not allow the account to be compromised if the security code is discovered.

Local affiliate ABC7 claims that Will’s discovery was just one of several in the area.

In an email to the Daily Dot, a time 7-Eleven representative urged customers who may have been impacted by card skimmers to call their service line.

The Daily Dot reached out to Will via TikTok comment.