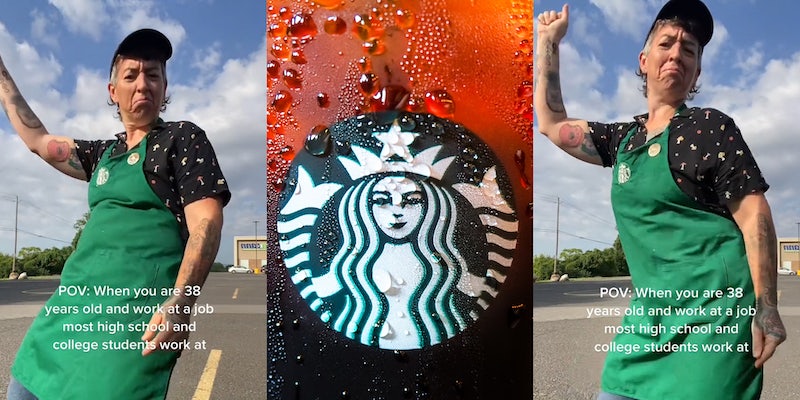 ‘I’m 43 and still bartending! Do what makes you happy!’: Worker makes video on working at Starbucks at 38 years old with high school and college students

A woman on TikTok says she’s 38 years old and working at Starbucks—and she’s proud of it.

The TikToker, named Joanie (@joanielovesjoanie13), shared a video of herself smiling and dancing in a parking lot wearing her Starbucks apron. The video, which garnered about 377,000 views, is captioned, “I have reached peak status in my opinion.”

“POV when you are 38 and work at a job most high school and college students work at,” the video’s on-screen text says.

Viewers said Joanie has nothing to be ashamed of working at a job with generally younger co-workers.

“It’s an honest job!!” one viewer commented. In reply, Joanie wrote that she “LOVES” her job, and it offers her good pay and great benefits.

“I respect everyone that works. Doesn’t matter where,” a second commented.

“I’m 37 and I work at a gas station. We all have to have a job to make money for our bills. As long as it’s honest work, never be ashamed,” a third viewer wrote.

Multiple other viewers chimed in, sharing their own ages and jobs.

“I’m 34 and I’ve been at Subway for almost a year! I’ve been an addict most my life, and I finally WOKE THE F UP!! we are doing better then before,” one user said.

“36 and working in fast food grateful I have a job and can work,” another user wrote.

A third user shared, “A job is a job! Im just a housekeeper at a hotel but it pays the bills kind of.”

“I’m 43 and still bartending! Do what makes you happy!!” someone else said.

Some viewers said Joanie’s lucky to have an honest job that comes with the perks of free or discounted coffee.

“Nah free starbucks is a big flex,” one viewer commented.

“Babe, the free coffee is enough for me,” another said.

The average age of a barista, according to Zippia, is 24 years old. According to Starbucks, some of the benefits of working at the company are receiving health coverage, a retirement plan, and paid time off. The company also “offers eligible partners the opportunity to earn a bachelor’s degree with 100% tuition coverage … through Arizona State University’s top-ranked online degree programs.”