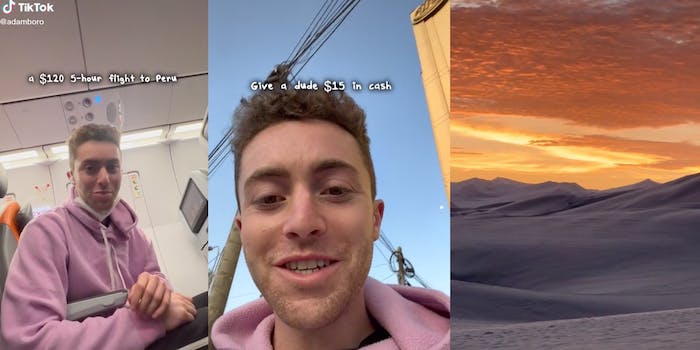 ‘You know the value of that labor’: TikToker criticized for paying $15 for 4-hour drive in Peru, sparking debate

'This is a perfect example of privilege.'

A TikToker’s video showing “travel hacks” for saving money abroad has drawn hefty criticism on the platform, where they are being called out by other users for its unethical nature.

The video, posted by Adam Boro (@adamboro), shows his trip to Peru at every step, from the airport, to additional drives and getting locked out of his hostel. It has garnered 7 million views on the platform since being posted on Jan. 17.

“So I heard that if you take a $120, five-hour flight to Peru, walk out of the airport, take a $4 Uber for half an hour, give a dude $15 in cash for a ride, and go on a four-hour road trip with him across a Peruvian desert, you can get dropped off at this one sand dune then run up to the top and experience one of the most beautiful sunsets ever over an actual desert oasis mirage,” Boro says. “And even fireworks, too. There’s so much more. Get a workout in on the sand dunes, ride dune buggies with your brother, make some new friends and the hostel I’m staying at is only $18 a night.”

Some people appreciated the TikTok, with several folks saying, “I’m doing this.” However, the seemingly exploitative nature of the video—finding every way to save money while traveling in a country with a high exchange rate for the U.S. dollar—has rankled with some viewers. In particular, TikToker @notwildlin stitched the video and called Boro out.

He went on to say that seeking to “squeeze every fucking thing you can” out of people is “unhinged” and “diabolical.” His stitch of Boro’s video has also gotten 99,000 views on TikTok.

Similarly, commenters on Boro’s video pointed out that a lot of the “deals” he shares in the video rely on exploitation.

“People from rich countries always talking about scams in places for travel, when all the while, they are the scams exploiting locals when they can,” one commenter wrote.

In the comments of his video, Boro explained that he and three other travelers paid the driver $15 each, bringing the total payout to $60. In response to one commenter who suggested this was still too low, he said the driver set the price.

“The driver asked for $60… And our local Peruvian friend that came with us said this is actually much more than they usually charge for Huacachina ride,” Boro commented.